We have all made mistakes when we buy the wrong radio.

I give you some tips to work out how to achieve perfection. Well, certainly a balance!

I recently had the privilege of dealing with Chris Taylor of Taylor Made RF who supplied me his rather excellent custom keypad for the Kenwood TS990s.

Chris gives the device the part number TMRF TS990KP and it follows the convention as outlined in the user guide 16-7 of the TS990s user manual which allows for the user to program each of the 8 function keys a specific task, for instance; change antenna, play a recorded voice macro or change filters. An extremely handy accessory.

Of course, you could build one of these but for an “appliance” operator and for sheer mini-bling, the TMRF TS990KP is a delight to use. It comes very nicely packaged with basic instructions, a simple 3.5mm jack to jack stereo lead and of course, the engineered keypad.

END_OF_DOCUMENT_TOKEN_TO_BE_REPLACED

I finally took delivery of my TS990s in early January 2014 and it came with the latest firmware from the factory. First impressions, distilled into single words: massive, engineered, beautiful, functional, imposing, radio bling. But not a microphone in sight which I thought was pretty odd but they must have got their sums right, I would never had used a cheap mic on this wonderful radio anyway since I use a stick mic on a table boom (Heil Goldline) but it would have been good to check without making up a cable.

Everything about this rig is solid. My expectations had been managed by all the articles that I’ve read on the internet about the radio and I double checked the radio when I compared both the FTdx5000MP and the TS-990s at the RSGB convention in late 2013. For me, the TS-990s was the winner, although more expensive. The main reason for switching my allegiance from Yaesu was the size (I like very large radios), the in-built monitor and scope function, and particularly the fact that a single USB cable connects the rig to my WIndows 7 PC, effectively de-cluttering my MK2R+ SO2R system. I was fed up with all the wires everywhere. END_OF_DOCUMENT_TOKEN_TO_BE_REPLACED 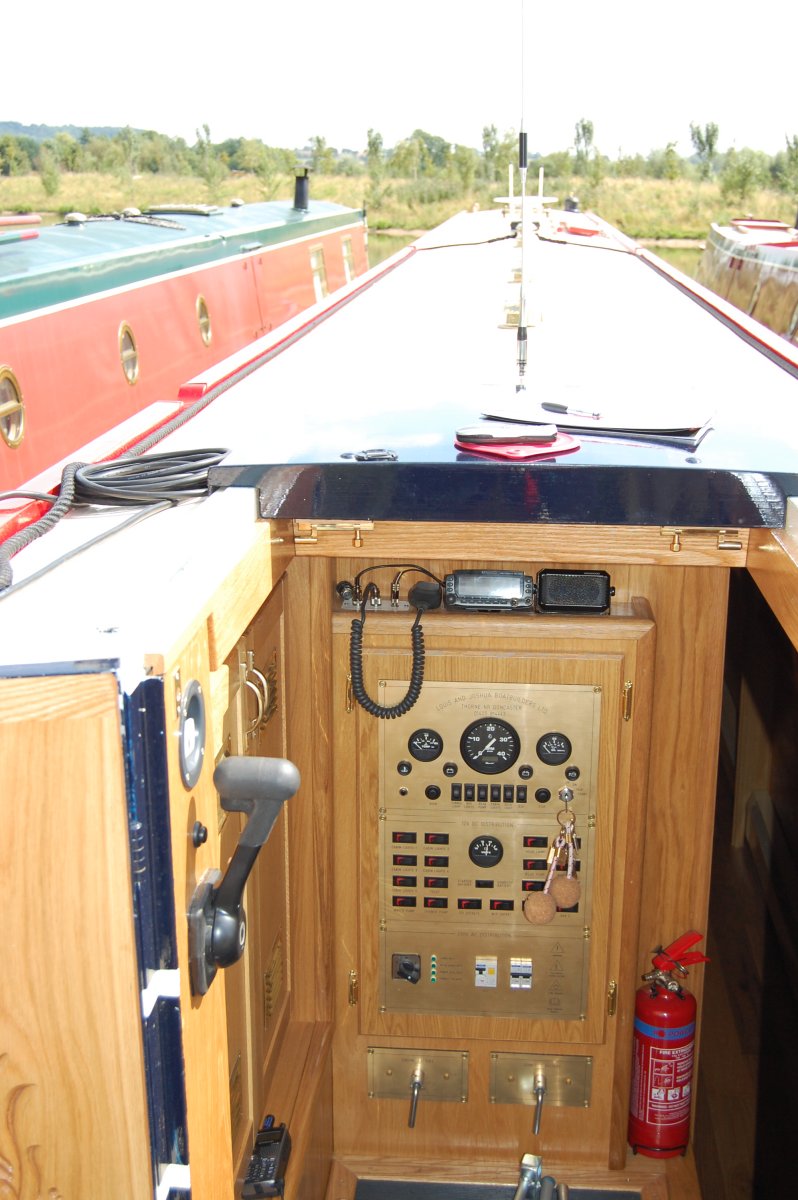 I’m pleased to report that after soldering hundred of connectors last Friday afternoon, the remote head for my marine-style TS-2000 installation worked perfectly, even though we had extended the head by 70 feet (21 meters).

How did we do this: The remote head requires extensions for a) 8 pin Microphone b) 2 core loud speaker and c) 4 core data. I had heard of a number of people complaining about RF feedback and other such “funnies” so I reduced the problems by over-specifying on the coax run (Ecoflex 10) and going completely over the top for the 8-pin mic and data cables.

The 8-pin microphone connector was a heavy-duty 8mm screened 25m reel from Farnell components at £90, expensive – but I felt worth it. The data was shoved down a neoprene style 4-core professional OFC microphone cable, as was the loud speaker.

The reason for the OFC microphone cable was an alert I had from a user on one of my Yahoo Groups suggesting that unless I used top-quality cable, the high frequencies might roll off on TX. Not being able to change the installation once the boat was built, I had no option but to buy the best cable I could find. As it happens, the audio is currently routed through the 8-core Mic lead, however I do have the option of running the mic audio through a spare pair from the professional microphone cable.

Tests demonstrated that nobody was wise to our remote head. No interference was discovered whether on our outgoing signal, nor on our data lines or speaker and control lines. Not one ferrite clip was used. Remarkable.

A first class effort. Thanks to james (M3YOM) for doing the soldering!

If you’ve been keeping up to date then you’ll know that I have chosen the TS-2000 as the primary radio on board our new narrowboat, “Wherethehell-Rwe”. At the helm (which is a dead give-away for my yachting heritage) I have specified the RC-2000 which should be rather fun to muck about with as I swan along at 3mph across the countryside. In English then, the TS-2000 will sit at the front of the boat near the bow and 60 feet away at the stern (the back.. or in narrowboat terminology, the steering position), I’ll be running an RC-2000 remote controlled head, remote microphone and remote loud speaker. Clearly I’ll also need a switching system up near the front so that I can also use my toys in the evening in the comfort of the boat.

Isn’t this a bit over-the-top, I hear you ask? Oh yes. For those visitors to the site who haven’t seen a narrowboat, they are the long, thin steel boats that sail the inland waterways and canals of the British Isles (they used to be made of wood). The canal system was started literally hundreds of years ago and squeezes through the cities of England, Scotland, Wales and Ireland. Clearly running a bloody great big HF antenna is completely impractical, which is exactly why I’ll hinge my Shakespeare Marine HF SSB vertical over to rest when we’re motoring. However I have purchased a small 4-band 10/6/2/70 antenna that will allow me to play CB, 10m, 6, 2, 70 and PMR446 from my steering position. This antenna pulls-n-lays so that we can crouch under trees and bridges as required. Of interest, modelling my Shakespeare 5300 HF antenna whilst it’s actually lying flat to the deck, does demonstrate a small RF bubble of around -15dbi for the low bands. This will mean I can make some contacts on 40m and 80m as I travel along. Thank goodness for a high-power CG5000 ATU that has just arrived that will couple the HF antenna to my radio for an all-band experience (http://www.hamradio.co.uk/acatalog/Am_TunUnits_MyDEL.html)

I had seen pictures of the RC-2000 on the internet and I always thought it was about the size of three cigarette packets. I was about 40-50% too big. It’s more like one and a half packets sitting end-to-end (maybe a whisker more but I’ve stopped smoking so I can’t judge too accurately!). It’s smaller than you imagine because you don’t often see marketing literature or google images with the RC-2000 in situ with another item like a microphone or something.

What’s in the box? You get the head itself and a pretty external speaker that matches the size of the RC-2000. The speaker is very well made and the sound is good, peaking strongly in the 300-3000Hz band for clear voice comms. Three main cables come with the box, a large microphone extender that has a CAT5 joiner near one end connecting a female and a male 8 pin mic extension together. I don’t know why they’ve done this? Maybe so you can squeeze the CAT5 plug through little holes in your vehicle? Frankly I’ll be cutting this part off and replacing with something properly grounded. You also get an external speaker lead and a 4 way control lead. It says in the manual that one end is a 4 pin RJ45 style socket and one end is a 6 pin, in fact this is slightly misleading. The 6 pin doesn’t have 6 pins – it has 4. However the confusion reigns because it’s the size of a regular 6 pin version but the two outside slide connections / pins are removed completely. The pin-to-pin layout essentially transfers all pins on the 4 pin plug to pins 2, 3, 4 and 5 of the “6 pin plug”. If you have come here from a google search, I trust you can work this out! You also get a bag of screws, three clip-on ferrites and a large beefy TS-2000 Mobile bracket. Lastly, don’t forget a neat mounting bracket for the RC-2000 and the remote speaker. 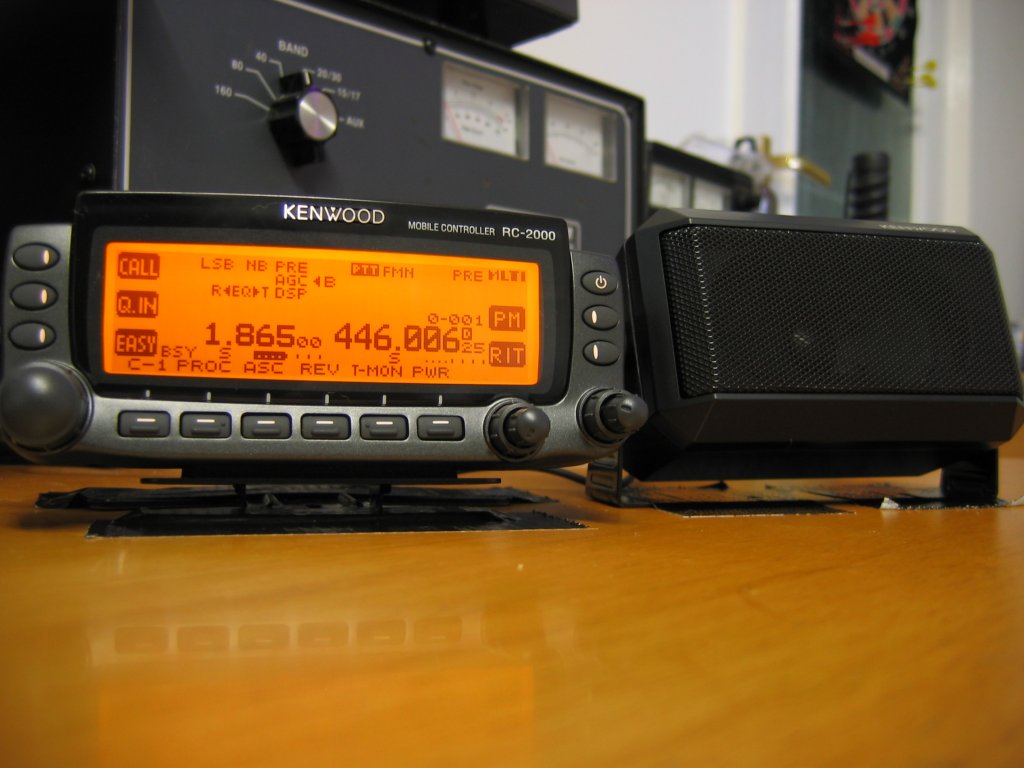 The initial fears of the size issue soon disappear when you plug everything in and switch it on. Menu 00 (Brightness) and menu 59 (Contrast) work here for both the head and the TS-2000 at the same time, so you may have to enter a compromise situation, particularly on the brightness – however you can program different “users” and each user can have a different requirement so whilst using the main unit, you can select user 1 and when using the remote, you can select user 2 (for instance). I was initially extremely disappointed to start with because I couldn’t fathom out how to increase the contrast until I hit upon the idea of menu 59. Working these two menus mean that you can get a really clear and cute display on the go.

Using the RC-2000 itself is very intuitive with lots of neat stuff tucked away. I won’t give you a complete run-down because that would be extremely tedious however be assured that I was up and running in seconds. Apart from the soft switches down each side and across the bottom, you are left with three control knobs; the main VFO which doubles up as a finer VFO by pressing once, then the twin squelch and volume controls which mirror exactly what the main TS-2000 does.

The soft switches work well. Bottom left is initially called A-1. Pressing it repeatedly changes the functions of the bottom buttons via deeper menus, A-2, A-3, and A-4. Holding it down for about a second gives you the B series of menus as described and finally holding it down again gives you the C series of menus. Inside all these, you are mirroring the functions on the TS-2000 in various ways.

Essentially, everything that you can do with the TS-2000, you can do with the RC-2000. I’ve had mine sitting beside me for 24 hours now, forcing myself to use it for everything from changing power settings through to recalling memories. It works well – and just for fun, I called QRP into Russia on 10w and scored a hit. Why QRP? I just thought it might be an idea. Don’t worry, I’ve gone off the idea already! 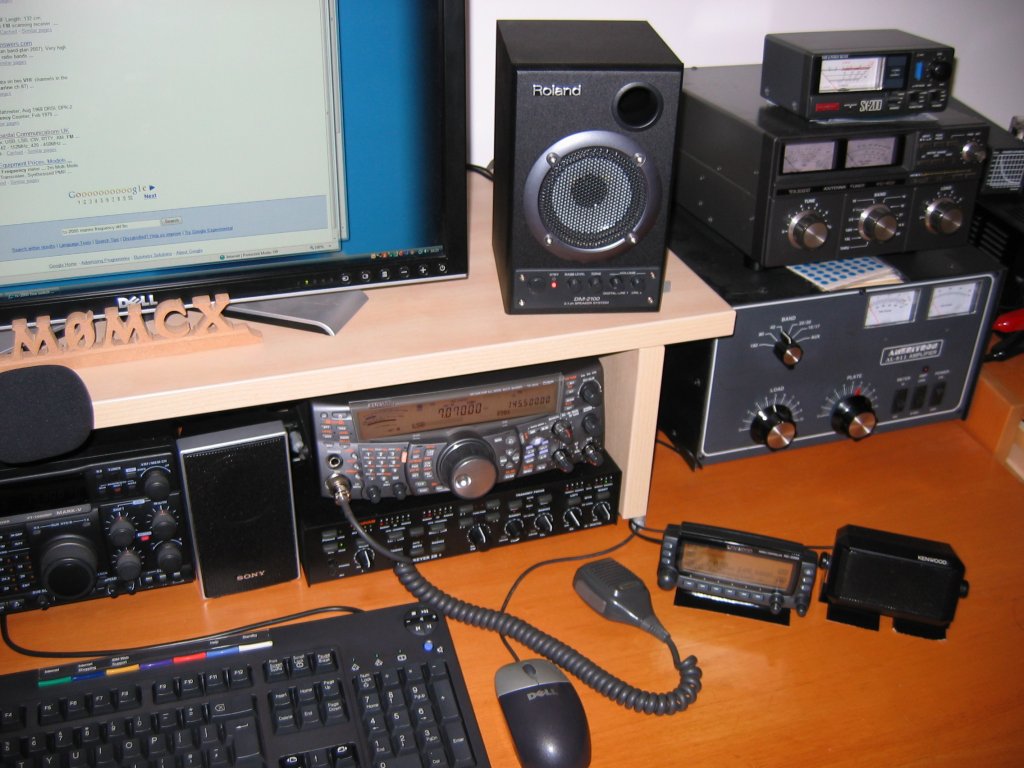 However, the UP/DOWN keys on the microphone is a heck of a lot faster so if you’ll be running the stock mic, you can NET someone in perhaps better by using that.

The second concern is the quality of the remote VFO knob. It feels a bit cheap, perhaps fiddly but I’m spoiled with a number of FT1000 variants in the shack here and of course the TS2000. To be fair, there’s an element of chalk and cheese here – after all this is a remote head is extremely economical, attractive and functional – and fairly unique in the amateur radio market, it’s not a snap-off, it’s an additional piece of equipment that will either extend your shack in your home to perhaps a different room or to another wall in your shack. Of course, most will buy it for mobile work, and what a beast that would be? You only need to add SGC’s 500 watt amplifier and a CG5000 800 watt PEP auto coupler and you’ll be mobile QRO all-band for under £5k! Oh! You’ll need an 8 foot stainless whip

Marks out of 10? Well I was expecting to give this an 8. I really was. I thought it would be too big – and a display that needed some “imagination” to make the best out of it. However now that I’ve had it on test for 24 hours, I can honestly say that it’s now giving it a 9, only losing points on the VFO issue that I’ll probably get over in time anyway.