60m is an interesting band. it’s partly channelised into small segments and the propagation is a cross-breed of 40m and 80m.The band was first introduced apparently in 2002. Over the years, various countries have allowed their amateurs radio operators to use the band. All this is negotiated and approved in conjunction with the ITU World Radiocommunication Conference(s). Many countries are now “on air” and can be heard. Be careful though, their frequencies may be different to ours.

In the UK, this boils down to 100 Watts maximum transmitter power and 200 Watts effective radiated power (* see note). Only Advanced licence holders are allowed on 60M band. You used to obtain a NOV however I believe that’s finished now.

To get around remembering everything, it’s probably best just to set up some memories in your HF set. I don’t know about you, but all these fancy rigs come with memories – and we never use them. Well, I didn’t up until now. 60m is ideal for getting up to speed with these Memories (and you can scan the channels too which is something else few of us know how to work!).

The following table should be able to set you up for your HF set memories (as at February 2017).

CW (on or around)

Digital (on or around)

Here’s some antenna ideas for you: 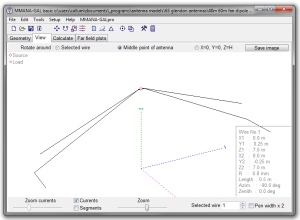 If you already have a 40m dipole, say an inverted V, you can easily add the legs for a 60m dipole directly on to the feedpoint. Some fiddling will be required for the antenna lengths, but adding a compact 60m antenna should be pretty simple. Essentially, each leg should be approximately 14m long in length, just a little bit longer than a 40m dipole frankly. And why not just float the remainder of the lower part of the legs across a fence or something. Ample for getting out across the UK during the day. 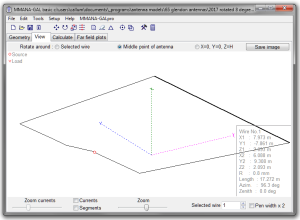 Why not try a loop around the garden, maybe all the way through the loft. Feed with coax and a 4;1 balun. Length of wire should be around 55m, possibly a little less. This is my current configuration.You’ll have the added benefit of using it on 30m band too (and 12m actually) without a tuner and most other bands at around 3:1 SWR. Picture of my loop in software. Gives around 6dBi NVIS.

Alternatively, build a big loop and feed with balanced line from a balanced tuner, as you would a doublet. And if you do have a balanced tuner – and the space, you might as well go for a big doublet which will get you on 160m as well.

I haven’t quite got to grips with the fine detail of using WSPR and JT65 on 60m. Out-the-box, the JT65 suite allows you to easily transmit out of band a little bit and there are a few band-police bloggers who have enjoyed pointing this out. If someone releases the fine details of how to setup JT65 for people who just want to plug-n-play (rather than why etc) it would be appreciated. I notice the RSGB site explains briefly you shouldn’t transmit out of band (yes we know that) but doesn’t clearly state how to fix this with both the dial frequency and the software setup. A case of telling us all off without the education for us to fix. I digress!

The current regulations say that although we’re allowed 100 Watts, the effective radiated power should be no more than 200 Watts. This means that if your antenna has a gain of more than 3dB, you’re technically breaking the rules. However, assume all other things being equal, as long as you are not using a yagi at 100 feet, you’re good to go.