I’m always curious to discover if a mono-band antenna will work efficiently (or otherwise) on another band. I recall that when I first studied antennas, it was explained that a dipole antenna will be resonant on every third harmonic. That means a dipole for 7.1 MHz should also work on the frequency three times bigger, in other words 21.3 Mhz. Actually, experience tells me that the real resonant frequency will be a little higher.

I happen to like the 40m band. When I first started in amateur radio, I enjoyed easily copying signals out to 1,000 miles with a simple wire loop and the 40m bug stuck with me. Of course during the day, a simple dipole or wire full-wave loop at 10-20 feet above ground level will work great. At night, once darkness falls, efficient low-angle antennas will also work very long distances. Trans-Atlantic SSB contacts are easily possible if you are prepared to stay up late and work the USA from around midnight (from UK). CW and Digital modes are even easier. Alternatively, get up early and work around the world, even VK and ZL.

I have made a number of verticals for 40m band. Most failed in that they just didn’t work as well as my low loop. Last year’s trip to Cornwall changed my outlook on verticals and I have since put up a big fat 8.6m long marine vertical in my garden and I have gradually added 25 buried radials. Regular readers will know that I used to feed this with the SG230 ATU (see https://www.m0mcx.co.uk/marine-vertical-installation-with-radials/). Recently I junked that idea and instead thought I’d tune it for 40m as a mono-bander. Good news, for 40m, it works pretty well with an impedance of about 35 ohms* (see note at bottom). However, my big random 60m loop fed with an ATU in the attic normally still outperforms it, particularly during the day for NVIS “inter-G”. 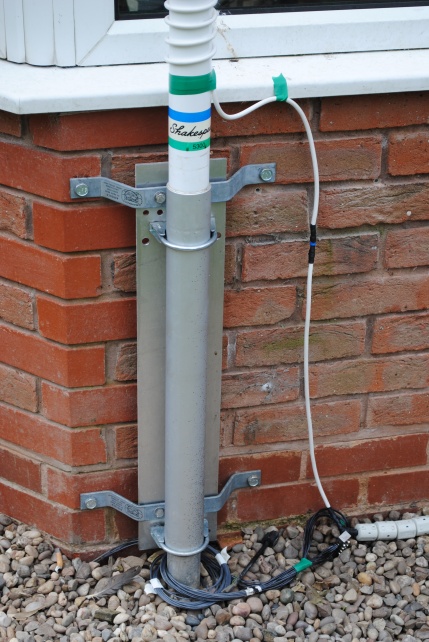 It was whilst mucking around with this marine vertical that my interest in how I might achieve a good match for the 15m band might be achieved. Maybe I could achieve a 3/4 or 5/8 vertical for 15m? After all, will the formula for every third harmonic still hold true for a vertical too? Well, nearly.

Out the box, my marine vertical was too short. It’s only 8.65 meters long and experience tells me that a quarter wave ground mounted vertical for 40m band needs to be around 9.5m long, depending where you want the bottom of the SWR curve to be. Further, the resonant frequency can change slightly if you add more radials. I have ended up with 25 radials of various lengths. The average radial length is around 8m. The good news is that a well installed 40m vertical will give you a very broad 2:1 SWR curve of over 1 Mhz easily covering all of the 40m band. To compensate for my slightly reduced vertical element length for 40m, I added 4 turns of 3-core white electrical cable as antenna wire 1m from the base of the antenna. This gave me a fine resonant frequency of 7.125, effectively making the antenna slightly longer.

Checking on the 15m band though, I noticed that my SWR curve was only starting to become usable right at the top end of the band; 21.450. Below that frequency, the SWR was less than enthusiastic. As a keen digital mode user, as well as SSB, I lengthened the antenna, changing my four turns around the base of the vertical to six, adding around 30cms in total to the amount of extra wire in the system. This dropped the resonant frequency to 7.03 and also dropped the 15m band by the effectively three times the difference. Remember, every 100Khz I dropped the 40m band, I would be dropping the resonant frequency for 15m band by 300Khz.

My SWR curve for both bands is now well under 1.6:1 and signals on 15m band are now most comparable to my big loop. In fact, the further away the DX station, the better the vertical seems to work, perhaps an indication that I have achieved some low angle gain.

Dave, K3DAV talks about the magic length of a vertical being 64%. He wrote an article about this here:

He says that 64% element length is apparently the best vertical length that delivers the greatest gain at the lowest angle of radiation.

I read Dave’s article and began to wonder how far off I was in achieving 64% for my 15m band.

Assuming that I am allowed to consider the Velocity Factor (VF) of 95% for my main element, my maths seem to demonstrate this. Of course, if I’m not allowed to take into consideration the VF, then my theory won’t hold water!

* Note on vertical antenna impedance: A badly grounded vertical will give you a near 50 ohm impedance. Adding more radials actually drops the impedance to around 30 ohms for a fabulous grounding system. I can live with this mismatch which is still better than 2:1 SWR but it you can’t, you may need to transform the impedance. There are many ways of transforming these impedances but I’ll leave that for another day.