I’ve just had an interesting discussion on 40m this evening with Peter, OH6GHI, also an antenna enthusiast. I happened to mention that I was listening to him on both VFOs. VFO A on my dipole and VFO B on my vertical and I found the stereo image very interesting as the polarisation of his signal to me changed. 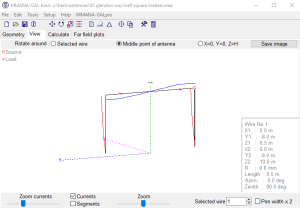 We got talking about half-squares and I confirmed that we were talking about the same thing, basically 2 x 10m verticals separated by a 20m top section. The half square is fed in one corner and according to my MMANA model, this should present 50 ohms and a great SWR curve across the whole of 40m.

A good balun should be placed at the feedpoint to keep the pattern nice and stop any stray RF from back down the outside of the coax.

My problem is that my garden will only support a top section of 16m and I wondered whether I could add a couple of small loading coils to add in the 4m of missing length?

Well the good news, according to MMANA, that this will work although comparing the non-loaded version to the loaded version, I do lose 1db of gain in the desired direction. Maximum gain is through the centre of the half-square.

According to my calculations, one could build this with a 15m or 16m top section, adding small loading coils 1/6th of the way from each vertical. You can see on my design view two small red crosses. These are the loading coil of 9 microhenries. According to the inductance calculator at 66pacific.com/calculators/coil_calc.aspx, that will be around 16 turns of wire around a plastic 50mm pipe around 50mm long (quite small).

Coax feedpoint will be in one corner. Doesn’t matter which one. The verticals shouldn’t actually touch the ground. My model lifts them off the ground by 50cms.

Peak gain through the middle at very low take off angles is around 2db greater then the vertical and peaks at around 20 degrees off the horizon. See the comparison between a regular vertical with 32 radials compared to the half square.