Note: This article discusses the merits of a 3/4 (three quarter wave) vertical -vs- a 1/4 (quarter wave) antenna.

You can build a 40m vertical quarter wave antenna and ground mount it with 16 x 4m radials and operate it at the third harmonic; 21MHz.

Most people who read antenna publications or the ARRL handbook believe that if you actually make this antenna, you’re creating a cloud-burner on 15m.

Technically correct (sort of) – but for DX, wrong. 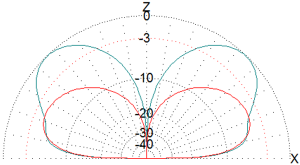 (click to expand quarter-wave in red, three-quarter wavelength in green)

But the usable radiation angle isn’t at 30 or 40 degrees on 15m band, it’s probably more (on average) about 5 degrees off the horizon. The good news is that the three-quarter-wavelength 15m band antenna actually (very slightly) out-performs a standard quarter-wave by around 1db at around 3 degrees (although a neat little bit of extra gain also at about 13 degrees too -vs- 1/4 wave).

Bottom line is that you don’t want that high 50 degree stuff, we know that. Just ignore it. In 4 years time it’ll reach the nearest star. Who cares. But just off the horizon, you’ll be fine.

Don’t believe everything you read.

See this link for some audio clips. Listen to the 15m band clips which were conducted on a DX Commander three-quarter-wavelength antenna (40m quarter-wave) as discussed.