Not being able to resist the pull of the decibals, I raided the larder tonight for a Pringle tin to build a wave-guide antenna from scrap parts. This is the story of that project.

Manufacture: I soldered a 30.5mm (quarter wave) element to a UHF bulk-head connector and drilled out a hole in the Pringle for hot-glueing. Exactly how far away from the base of the tin I should fit the element took ages – and lots of conflicting web pages. In the end, I aimed for 1/4 wave from the back of the tin. Someone is going to tell me that this is probably the most awful place to stick it – I can believe you 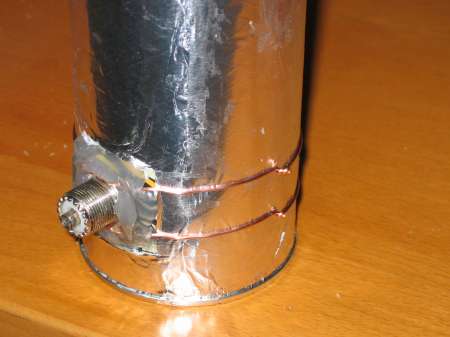 My multimeter couldn’t get a reading on the foil inside the can so I used kid’s water based glue to stick sheets of tin-foil to the outside. This tinfoil was grounded to the base of the tin, although I had some difficuty in doing this because there appears to be some sort of laquor applied to the base. The copper wires seen in the photo were to act as a physical and an electrical assistant; to provide a good ground to the outside of the can.

Ater connecting the Pringle-Wave-Guide to a buffalo wireless access point, I turned it in the general area of the kids room that was running NetStumbler on their network card. I waggled the can around in my shack, and went to the kids room to check if the signal strength had risen at all during the waggling. No luck. So far, it’s as much use as a dummy load.

It just goes to show that some experiments just fail.