I’ve had loads of fun tonight putting together the Andrew Grid antennas (well one of them) and duly installing it on an old brass curtain rail in the shack, pointing towards the kids PC in the “little lounge” (as we call it). The signal shot through the roof when I got the lobe on the sweet spot, bearing in mind that the lobe is only a few degrees wide, so get it wrong and you don’t see a signal at all! This is good news though and proves that my 2.4Ghz antenna designs were utterly rubbish 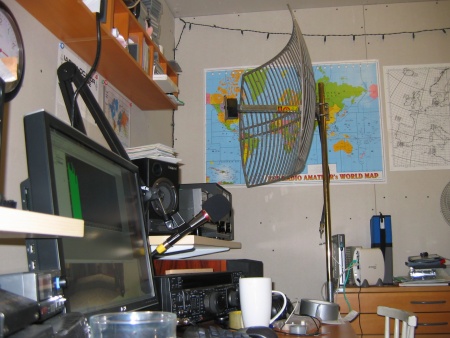 I tell you, it’s even bigger than this picture! Like all good antennas, they are bloody huge if you muck about with them inside a shack. Clearly designed for a roof on a rotator (in my view!!), I have decided that it would be a waste to put a wireless router on the roof, instead I am going to see if I can bring some Andrews Heliax down the wall and straight into the shack. Perhaps a kind amateur may help with a 20 meter run of scrap heliax? That way, I can play wireless networking, general purpose radio and anything else that tickles me!

The only thing that worries me is the polarisation. Should I mount this vertical or horizontal? I was going to go horizontal for a point-to-point wireless bridge but now I’m not so sure. I’ll have to mull that one over – I have a feeling that horizontal polarisation works better over long distances, we’ll see.

One problem though, the guy that sold these to me seems to have “lost” one of the antennas. He thinks he shipped 5 grid antennas according to his letter. However, I received 4. Something odd has happened. [Later] He’s emailed me saying that he’ll investigate on Monday because he didn’t pack them himself. [Later again] He only sent the four and now the fifth is missing so he’s sending a cheque for £10 as compensation.