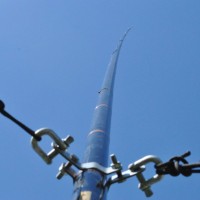 I’ve tried many verticals and never had good results APART from this one.

This is a 9.6m long fishing pole and the length of radiator is the same. I fixed 16 x 10m long radials to an insulator that I had lying around. I would have preferred this to have been aluminium but I already had three of these. Most of these bits were salvaged from the three-element vertical array with raised verticals that James and I made back in 2009. Each bolt was bonded together with some copper wire that is out of shot, underneath the insulator and the radials were politely scattered in an approximate radial system on the ground. SWR is 1.0:1 according to my electronic controller on the Acom 2000.

The results have been amazing but I do realise that I had two things on my side; location by the sea and almost no electrical noise. Bliss.

As I write this, I’ve worked 48 DX entities over about 7 hours operating time on 40m. Quite incredible. I’m a convert.