This weekend, we took the boat out for the first time as a family since the summer. Each time we have previously tried to take the boat out, we seem to have hit various mechanical snags and had to return home. This time it was the weather that nearly pushed us home. However my long lost genetics of the Outer Hebrides encouraged me to continue.

On Friday afternoon, we motored Wherethehell-Rwe out the marina via half-inch thick ice and up the three locks outside the marina. Luckily the ice finished at the canal. We stopped discretely opposite the tow path between Calcutts and Wigrams turn conveniently between two trees.

I have recently done some fault-finding with our marine TV antenna. This is the flying-saucer style one from Shakespeare Marine. I have raised it up 14 inches from the deck with their smallest custom extension mast and it’s made a fantastic improvement. I’ve also got a 4 foot extension mast too. It only takes a few minutes to add the large one when we’re moored up for even better signal quality. I’m extremely pleased. It means that in the main, each TV can now receive the big digital channels as well as Sky. Last summer, we only had Sky which was pretty annoying as we all had to watch the one Sky channel across all the TVs. Experiencing proper TV now on each telly has made a terrific improvement for all on board – and it even possible to receive TV whilst on the go! We can’t have Sky whilst moving though. I did look at it but it’s pointless for narrowboats because of the bridges, cuttings and trees etc. It would be forever losing signal.

I digress. By 6:00pm, we had the wood-burner flat out, the central heating on and a 500 watt electric heater in the back bedroom. We could only just keep the temperature up as the ice formed around the boat and dumped the overnight temperature to nearly minus 10 degrees centigrade. Not good for live-aboards I fancy. I have a cool electronic weather station at home that I have never put up, I might use it on the boat instead since it’s got a computer interface etc. It could be an interesting addition. I’ll let you know. 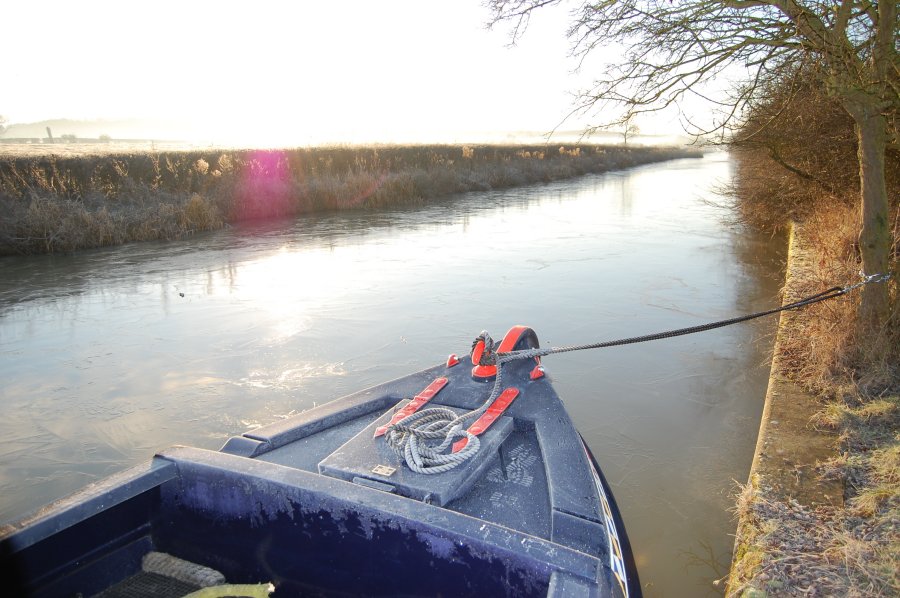 Nearly an inch of ice had formed on the canal surface during the night which surprised me. I didn’t think it could form that fast. It certainly made a bloody racket though. Everytime you moved, it would scrape and groan on the hull.

We had a laugh as I zoomed blocks of ice up the canal for hundreds of yards, listening to the tinkling of the blocks skittering across the surface. We waited and waited for someone to be bold enough to come down our bit of the Grand Union canal but nobody did. Finally I asked a dog walker what the conditions were up at the Oxford junction (600 yards ahead) and he confirmed that boats had already broken the ice ahead. Wendy encouraged me to make a run for it, so at midday, we gingerly set off, my first ice-breaking adventure.

Getting out of the overnight berth was a problem and it took a bit of diesel to get the momentum and turning correct to actually leave the overnight berth and get the boat into the middle of the channel. I certainly left half a pint of paint on some of the ice plates. Wendy and the kids were quickly up in the bow watching splinters of ice flying out in all directions as we crunched along, virgin ice-breakers. Finally, we reached Wigrams turn and we could followed the tracks of previous boats.

It’s three or four lock-free hours to Braunston from Wigrams – probably less. In the main, it was an uneventful journey other than the tight bridge turns where the stern would catch on thick plate-ice and restrict my turning ability accompanied with a horrible paint-stripping sound as the stern dug deeply into the plates, shuddering against the boat. 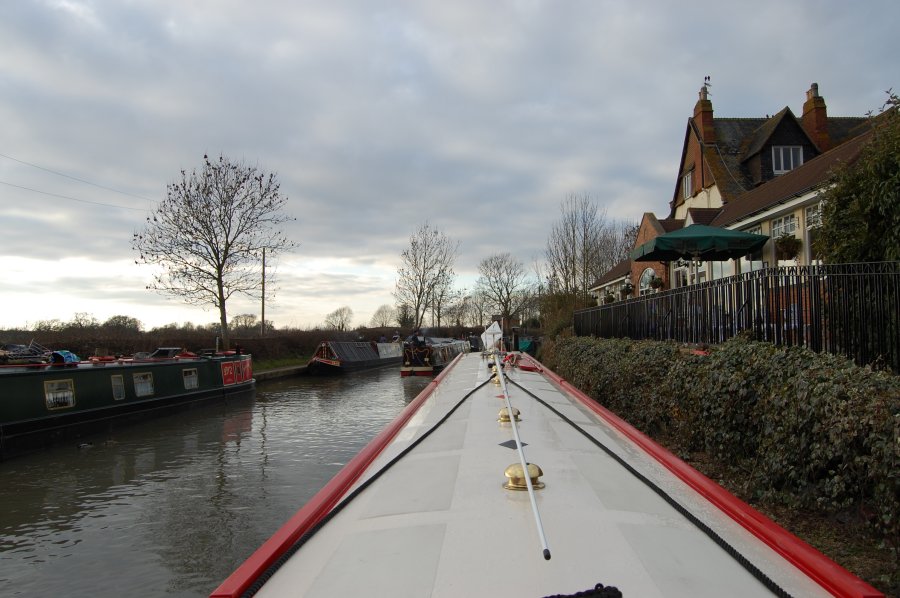 By 2:30pm we were at Braunston and after turning around by pushing our nose into Braunston Marina, we stole the visitors mooring directly outside the Millhouse where we received a great Satellite signal but no Digital TV (the pub is right in the way). Once moored up and the fire re-fuelled, we popped into the pub for a coffee (I mean Carling!) and watched the kids mucking about in the play area. I squared it with the barman for us to moor up but it turned out that they had a kitchen problem and advised us of a 45 minute wait for a plate of chips so we bailed out and strolled up to the village to check out the pubs and get a spot of shopping. We found the Old Plough in the High Street and promised to check it out later that night. It opens at 6:00pm.

That afternoon, Wendy and I crashed out – completely knackered because the previous night’s strange noises that had kept us awake as the ice froze all around the hull, however we soon had a second wind and took in the delights of the Old Plough. This is a pleasant pub but remind me to book next time, they’d had a rush on the place and we had to start our meal in the public bar where a skittles match was about to take place. Luckily, a table by the fire became free in the restaurant and they invited us to move back.

Once settled, Wendy started scribbling on Emily’s notebook. After a minute or two, she showed me what she had written. It went along these lines: “The woman right behind you rolled her eyes at her friend when she saw you come in to the bar. I caught her eye and she knew that I had seen her. She went scarlet red with embarrasment“! I immediately turned around to see for myself but the lady kept her head down very low all night in fear of what I might say. Ah-ha! The fun of having a leopard-skin print Mohican hair-cut!

Sunday morning was again very cold. This time without sun and it remained below freezing all day. It took me longer than usual to get some heat back into the boat. I switched on the 500 watt electric fire, sucking the batteries dry for an hour. Eventually at 10:30am, the mains tripped off as the Victron inverter shut down due to lack of DC available. Our four 110Ah batteries were almost out of real juice. This was my signal to start the engine and get the 5kW generator running. It’s also a reminder to get four additional batteries installed!

Luckily for me, a boat called Xenia came past as as I was preparing to cast off. They shouted over that the Oxford had already been ice-broken by someone else. Great! We needed to get back as the kids started back at school in the morning.

Wrapped up with two pairs of socks and a couple of heat jells on standby for heating up my hands periodially, we left the mooring at about 11:00am with a freezing wind on my cheeks. Wendy came to join me on the stern as we turned at the Oxford, west-bound for Calcutts. Nothing to report on the return journey other than the continuing amazing sights of the large sheets of ice up to an inch and a half think that would move out the way -or get snapped as we motored past. I kept the throttle a hundred RPM less than normal at around 900 so we made marginally slower time. I stopped for lunch at about 2:00pm which helped as the cold was starting to drill into me, however it turned out that we were only fifteen minutes from Wigrams Turn and the three-lock flight back to our marina.

As a coincidence, we shared the first lock with our marina neighbours, Muchgiggling who happened to be about 5 minutes behind us. They had been out since Boxing day and had had 12 boaters on board for New Years eve. Bet you they got plastered! They stopped for a pump out but warned me of a possible icy time in the marina. You bet.

Little prepared me for what I found in the marina. The outer marina was navigable like normal and just under the bridge to the new marina was also navigable. But clearly we were the last boat to have motored on this since Friday. I could just see our tracks in the ice from our departure. Nothing had moved since then. The ice was between an inch and maybe two inches in places and half-way across the new marina, it stopped us in our tracks. I reversed and applied full power and made efforts to keep the boat pointing approximately in the right direction. At full power and already going maybe four knots, the ice brought us to a stop – even with our 50hp Beta at nearly 2,000 revs. A single sheet of ice, thousands of tons in weight had us by the short and curlies. As a concerned skipper, I could only continue repeated attempts at the ice breaking to get us closer and closer to the pontoon, 2 meters at a time – and had it not been for a chap called Steve from a boat moored near our friends Graham and Jo, I don’t know how I would have managed to get moored up. Tony missed the fun, they arrived 15 minutes later not realising the seriousness of my predicament.

Anyway, a successful and enjoyable trip. I look forward to some more sunshine next time along with an early blacking!