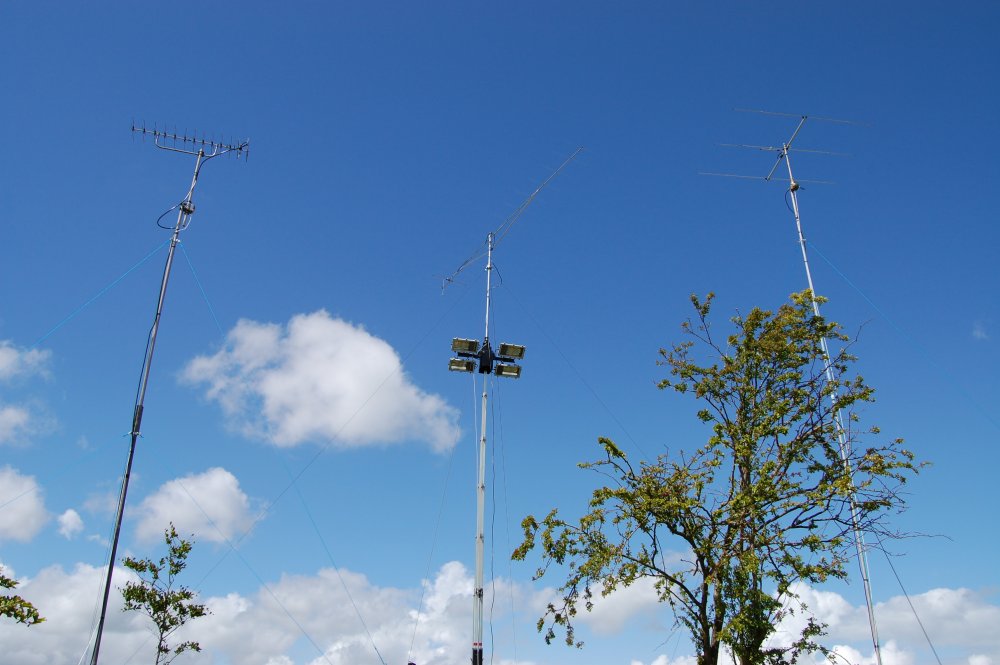 Collectively, we have extremely limited experience with VHF. It came as quite a shock to the system to score so few QSOs relative to HF contests that we enter; we are used to scoring 1,500 contacts in a weekend. I must say that the turn-out felt positively low. Is this really the state of VHF contesting in the UK..?

Our location couldn’t get better for a Midland club; 1,000 feet high with easy access on private land (IO91bx [edited, did say IO92bx..!]). The weather was a different story with both the consistent rain and very high winds contributing to some scary moments. Why all three antennas were still standing on Sunday morning, I can’t understand however the guys, stakes or poles didn’t move an inch. Perhaps a testimony to all my recent knot learnings at the Scout Hut!

With limited resources on VHF, most of the gear had to be procured recently to enter this event including a 17 element Tonna and a three element Moonraker beam for 6m. A couple of months ago, we bought a strange X-Quad affair for 70cms which after completely stripping down and rebuilding last week, appeared to work well but we have no way of comparing it to anything else. [Edit: since found out this is a Jaybeam Multibeam, 48 element 12dbd ATV type antenna circa 30 years old]. At 2m long with zillions of elements, I trust it’s as least as good as the Tonna is on 2m. Time will tell. Again, we had to get equipped with rotators so we bought a TV style rotator for 6m and acquired a Hirschman rotator when we bought the 70cms antenna. The Yaesu G450 is permanently attached to the hydraulic tower for the 2m station (normally running an A3S). Coax was also a stumbling block, particularly for 70cms where we only had 50 watts available to us and potentially lots of loss on our standard cut of Westflex, perhaps too lossy for 70cms? A 30m length of Ecoflex 15 was despatched from Diode with matching connectors last week to compensate.

Logging was exclusively N1MM on Dell Optiplex machines and 15 inch flat-screen monitors without networking enabled due to running separate serial numbers for each band. One Optiplex blew up on Sunday morning after refusing to boot due to condensation we think. We had shut the station at 2:00am for 4 hours to get some sleep and upon waking up and restarting the generator, James discovered an issue of the PSU. Hilarious at the time because when it was plugged in, it sounded like a crunchy plastic pop bottled being scrunched up and I’m shouting at Tim to take the plug out. But like the boy who always cried “wolf”, Tim’s got wise to my practical jokes and really thought I was scrunching up a plastic pop bottle and refused to cooperate. A final “bang” from the PSU convinced him that perhaps this time, I really was telling the truth! Very funny.

Before the off, Tim’s testing proved useful on 6m scoring a number of interesting DX entities, including 7X2RF from Algeria – which enlightened some passers-by who were amazed at what we were doing. I nearly sold two more Foundation tickets! 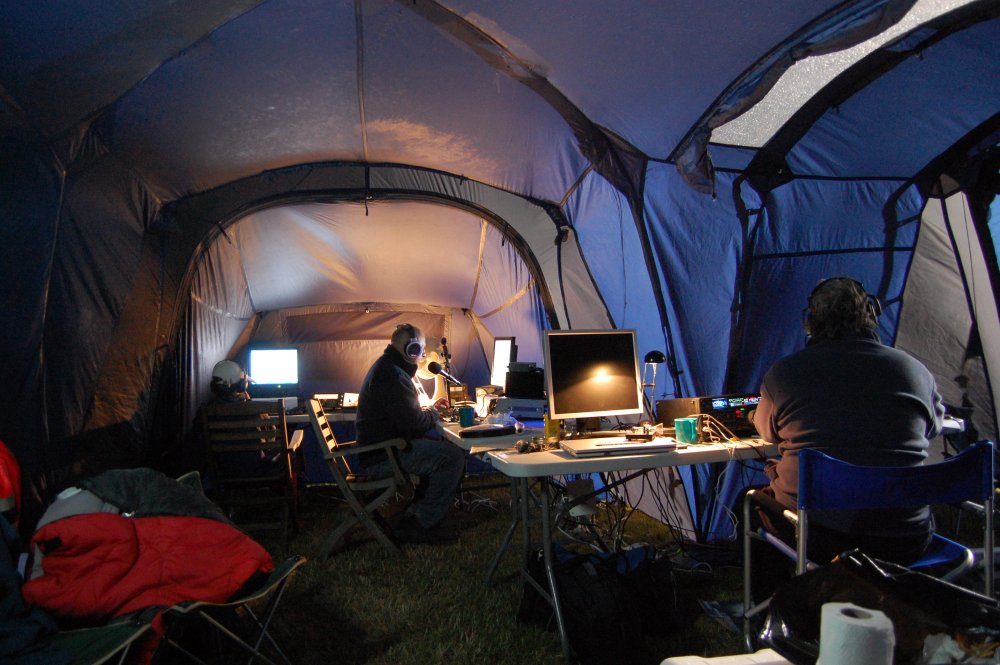 At 15:00hrs local time we started in anger with myself on 70cms, Terry on 2m and Tim on 6m. Having James and Aidan as rotation operators meant that 70cms didn’t become too onerous (50 QSOs in 24 hours..? Ugh!). Massive thanks to Aidan from the team here; he attracted at least 50% of our score on that band, refusing to give up and logging each contact in a determined and professional manner. This was Aidan’s first time on a contest and he’s just 12 years old. May I take this opportunity to thank those stations that recognised Aidan’s youthful voice and his achievement on this band, you stuck with him to ensure a 100% completion for each QSO. Aidan is currently under guidance as part of his foundation license and to be schooled in contesting so early, we think was marvellous. Thanks to all who helped him. Let’s be clear that he had guidance for each QSO and not left to his own devices.

As a “restricted” entry, we couldn’t use brute force to open any doors and it therefore is a slight embarrassment to only have logged 156 QSOs on 2m, 48 QSOs on 70cms and circa 95 QSOs on 6m.
The “magic” band did prove to house some interesting DX from North Africa through to the deep Mediterranean but 2m and 70cms held back offering us no more than 600 km contacts and then very infrequently. Most QSOs were inside the UK although 21 large squares were worked in the end from Ireland through to Germany.

The weather attempted to dampen our spirits but with such strong characters in the tent, we made our own fun and had a ball all the same. At dinner time, we turned the volume down on all three sets and sat down together for our evening meal. I had cooked a top-line Spag-Boll and Terry had us wash it down with a few bottles of bubbly. Fabulous atmosphere.

We were amazed at some of bad signal quality issues being produced on mostly 2m and 70cms; warbley modulation and severe splatter in the main. In one case, we had a couple of polite conversations over a period of a few hours regarding a particular club’s 60Khz splatter until they finally believed us and turned down the wick. I realise that Open class stations might adopt the AKR attitude, “All Knobs to the Right” but for the rest of us, even stations 60 miles away can still be 30db over S9 and this can spoil the fun when the signal isn’t as clean as it should be. Please check your equipment before the contest.

No real issues materialised bar some water in the 70cms feedpoint which was fixed by a wild guess. Dropping the mast and pouring it out and resealing it for another day had us back to full power. The PSU which blew up the 70cms Optiplex didn’t hurt too bad but dropped the 2m station for 10 minutes while James and I recovered the data by swapping out hard drives – just as Terry finally scored a small run into Northern France! The new tent, “Battalion HQ”, held up well to the weather, only developing a couple of extremely minor leaks after continual battering rain for 24 hours. With its huge side-pods, it really became a massive area to work in allowing a full kitchen in one area and an operations room in the other with a dining room for 6 people. We’ll roll this out again for SSB Field Day. Trust you’ll be there?

There is some mild debate in the team if we’ll do this one again. I’m told that VHF can be fun with some lifts into the continent but maybe Silverstone, Wimbledon and perhaps the rain damped that down – as did lift conditions I think.

I’m amazed that with all those FT847s and TS2000s sold, few operators perhaps even knew to turn on their radios for an hour and work a few of us /P stations on 6m, 2m and 70cms. However, we did work a few vertically polarised stations quite easily who were giving away single digit points and I thank those stations for coming on since we worked hard for every QSO. It’s really quite easy to score a few QSOs from home with a V2000 style tri-bander vertical. Someone, somewhere should fly the flag for this since hundreds of private stations could have helped make this a bigger event.