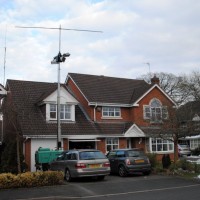 Last year, with the assistance of Stu, M0NYP, I built a fan dipole out of D10 military telecoms wire for 80m, 40m and 20m for club field days. There was a fair amount of gap between each element, probably about 5 to 7 degrees becasue that’s what I thought you should do. For those people who came to either the Avoncroft Mills on the Air day, or the SSB Field Day, will recall the antenna. However, we lacked 15m and 10m though which I found a disappointment.

To become “all band”, I considered adding more elements to the Field Day antenna but experience has taught me that multi-band wire dipoles have a tendency to get tangled in the field. Adding more elements would probably just mean more tangles = less fun. In a Field Day situation, that’s a frustrating day out.

As an alternative, I thought about using some old fishing poles that I had lying around to build a fan dipole for 10m and 15m. I wondered if the “fan” in fan-dipole was a myth? I thought about placing the 10m elements on one side of the fishing pole and the 15m elements on the other side, about a 25mm separation, tapering down to about 20mm separation near the ends. Using MMANA, I created a model and it appeared to work in software. There was a compromise but only on the 10m band; the take off angle looked to be 3 degrees higher compared to a mono-bander (at 10 meters above ground) and the SWR curve was slightly less – but still usable across the whole portion of the Data and SSB portion of the band at less than 2:1 SWR.

I was keen to build this but unfortunately my old fishing poles were severely trashed. I needed a generous helping of Araldite to salvage the first three sections of each pole to give me a 6m total wingspan. Unfortunately, 6m wingspan isn’t quite enough to place a full-size 15m band dipole right across the whole span. I aimed for 21.3MHz centre-frequency and this requires each dipole element to be circa 3.5m in length. I planned on letting the ends of the wire dipole for the 15m band droop vertically downward. As it happened, I used some hard-drawn copper wire that I had lying around and they “self-support” in a horizontal fashion off the ends of the fibreglass pole – but it would work either way.

In terms of feeding the antenna, I used coax directly to an off-the-shelf dipole centre with a load of clamp on ferrites as a choke balun. I was initially let down by some wet coax, throwing my SWR numbers out but replacing that and I was in business.

Hard-drawn lacquered copper wire with a diameter of 1.75mm was used to build the elements and in a “tuned” state, I can report the elements ended up as follows

* Note that for the 15m band, if you build this, you will need to factor a 25mm dog-leg near the dipole centre, where you take the elements through the fishing rod to the other side. In effect, this will add maybe 2 to 3cms to the dimensions.

I used this for CQ WPX and in operation at 10.5m in height, the antenna worked brilliantly with 1:1 SWR across both bands. Switching between my tuned 40m loop and my random 60m loop (with ATU), the dipole won by a couple of S points every time. Clearly my take-off angle was better and with 400W, I made 180 contacts with casual operating working some great DX, quite easily, from Japan through to Venezuela.

I conclude this report by saying that you don’t need to “fan out” the dipole elements to build a fan dipole. In my case, the fan is non-existent, in fact the reverse is true, as the elements spread out from the centre feedpoint, they actually get closer together. 73.