So I have just taken delivery of a very gently used Tokyo Hy-Power HF linear amplifier.

I had a case made for my ACOM 2000 made a few years ago. I’m pleased to report that it’s a great addition to the Ham Radio stock of toys and extremely handy for Field-Day operation.

James (M0YOM) and I are pretty excited about a new automatic, solid state linear amplifier from the ACOM stable. 160m through 6m with continuous duty rated at 600 watts. Well, when I say portable, I mean it’s more portable than say the ACOM 2000 – but still heavier than say an AL811. But hey, it’s super sexy, automatic and has that amazing legendary ACOM metering and inbuilt protection.

END_OF_DOCUMENT_TOKEN_TO_BE_REPLACED

Thanks to Nigel at Castle Cases, I now have a first-class flight case for my beloved Acom 2000 amplifier, all for less than £250. 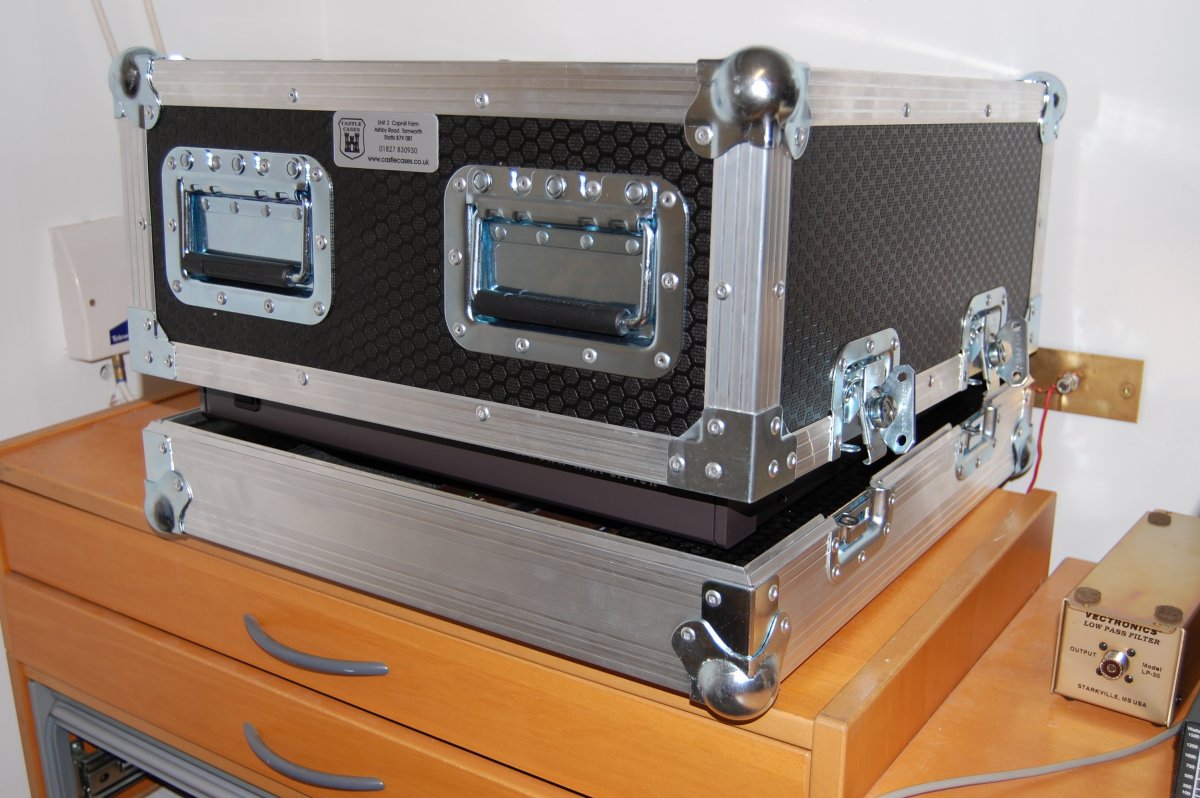 Built up from a 9mm touring-quality plywood with aluminium fittings and steel corners, clasps and handles, I’m hoping this will last me a lifetime. I particularly love the hex-effect ply finish which is Nigel’s standard offering. Nigel came up with the idea of building a platform for the amplifier so that I can still get to all the connectors on the reverse and the on-off rocker switch on the front panel. This has a dual effect of allowing a neat storage space for the three-pin plug and RS232 linked remote control panel.

I had a case built for a couple of reasons; a cross between safety and convenience: To transport the Acom reliably in its carboard box, one needs to split the transformer from the amplifier because of the weight. If you try and lift an Acom 2000 on your own, you could easily end up with an accident. Removing the transformer effectively takes about 15 kilos out the amplifier, making it a lot easier to shoe-horn it into its box but it takes forever. Of course, the cardboard will only last a few years too and will gradually become worthless. Who needs a box now..? I drove off today and left Nigel with my cardboard (sorry Nigel, I was going to take it away but forgot!).

Going through the trouble of removing the transformer means that I was loathe to pack it into the boot for field days and Scouting events. But having it sit permanently on it’s flight-case tray means that it can come out to play more regularly which means more QRO fun

Cheers all (thanks lads for the coffee too!) 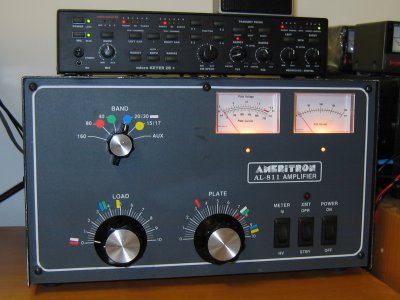 Don’t spend your life tuning amps. Do it once with sticky labels and forget!

I’ve recently un-mothballed my Ameritron which has seen good service and delivers 200 watts for 10w drive – ideal for PSK31 and other low-power digital modes. This amp will go further and deliver 400 watts for 30 minutes key-down so it’s ideal for full legal power in the UK.

Anyway, flicking from 80, 40, 30 and 20m during the grey line with the AL811, I’ve discovered that I have never mastered the speedy band switching that some operators appear to have worked out. So I developed my visual system(!) using sticky labels tuned against a 50 ohm dummy load to calculate the fastest (approximate) setting for each band. It works blooming marvelous too!

Since a picture tells a thousand words, I won’t bore you any more. Here’s a close up! https://www.m0mcx.co.uk/pictures/Ameritron_AL-811X.JPG

[Later] – I can’t get 10m to tune. Maybe it’s not an export model? In which case, according to sources on the internet, to convert a non-export model to an export model, one needs to make a mod by cutting a wire. This will enable 12 & 10 meters on the Aux switch. I hate engineering!

This was our first time out with our shiny new callsign with Chris (G1VDP), Tim (M3SDE), Lee (G0MTN) as well as myself as the main ops able assisted by Marti (M1DCV) and our 12 year old scout helper, Aidan – who ran the spotter station for the first time in his life – thanks Aidan. Colin (M3OFW) popped in a couple of times and took great interest in the setup – welcome to Colin.

For antennas, we went to town on qtr waves as well as dipoles for 80m and 40m but we let ourselves down by the tribander which we couldn’t get to work properly – showing fluctuating SWR, particularly on 20m where we could really only effectively run lower power. We found out afterwards that only one strand of copper was being used as the main feeder at the connection point to the driven element. Clearly a serious blow and we should have made many more Qs on 20m.

As a first time QRO /p station, we targeted ourselves at half a million points but fell short, mostly because of a lack of a big session on 20m but also due to lack of mults on 15 and 10 in my opinion. However, we aired the new tent and generator as well as my new ACOM and it all worked perfectly barring band filtering between stations which is being corrected by some band filtering currently on the drawing board of my friend Barry (M0DGQ). The main run station was my trust MP with Inrad roofing filter but due to a blow-up of my Mk5, we reverted to a backup plan of a TS2000 which actually performed pretty well as a spotter connected to a vertically polarised 40m loop which worked “all band” on receive. All coax was 50m lengths of Westflex.

Highlights was being called by ZL and VK on Sunday morning on 40m between 7:30am and 8:00am local time as well as hearing Tim asking for GW0AAA’s serial number again and again on 10m. I was out dropping the 80m and 40m verticals in the morning but was happy to hear a multi coming through. I found out later that some QRN gave him too much grief and we never made it, sorry chaps!

In terms of shifts, Tim and I worked the night – although I got the better shift; midnight to 3:00am. Tim went graveyard through to 6:30am (he’s a star!) and only woke me so that I could work the ZLs and VKs coming in. Is that because I’m older?

I realise that the interesting thing about these team events is how you put on a better show the next year etc. Of course, doing this with the open section means that you gradually get bogged down each year with bigger and better ideas until finally one becomes completely sensible and joins the likes of the Bristol chaps and string up a long wire or doublet with 100 watts. I believe that we have a couple more years left of being completely daft I think so perhaps there a chance of getting a higher score one year.

This is a new callsign / club with a new direction and a number of people need to be thanked for riding this wave with me, particularly all those mentioned above: Tim, Chris, Lee and Barry – and of course young Aidan and all those other young scouts that we hope to introduce to contesting over the years.