2008 will go down as a wet year. Both VHF NFD and SSB FD was a soaking experience. Luckily, as with most close knit teams, we laughed it off and worked through it, however a tough act all the same. 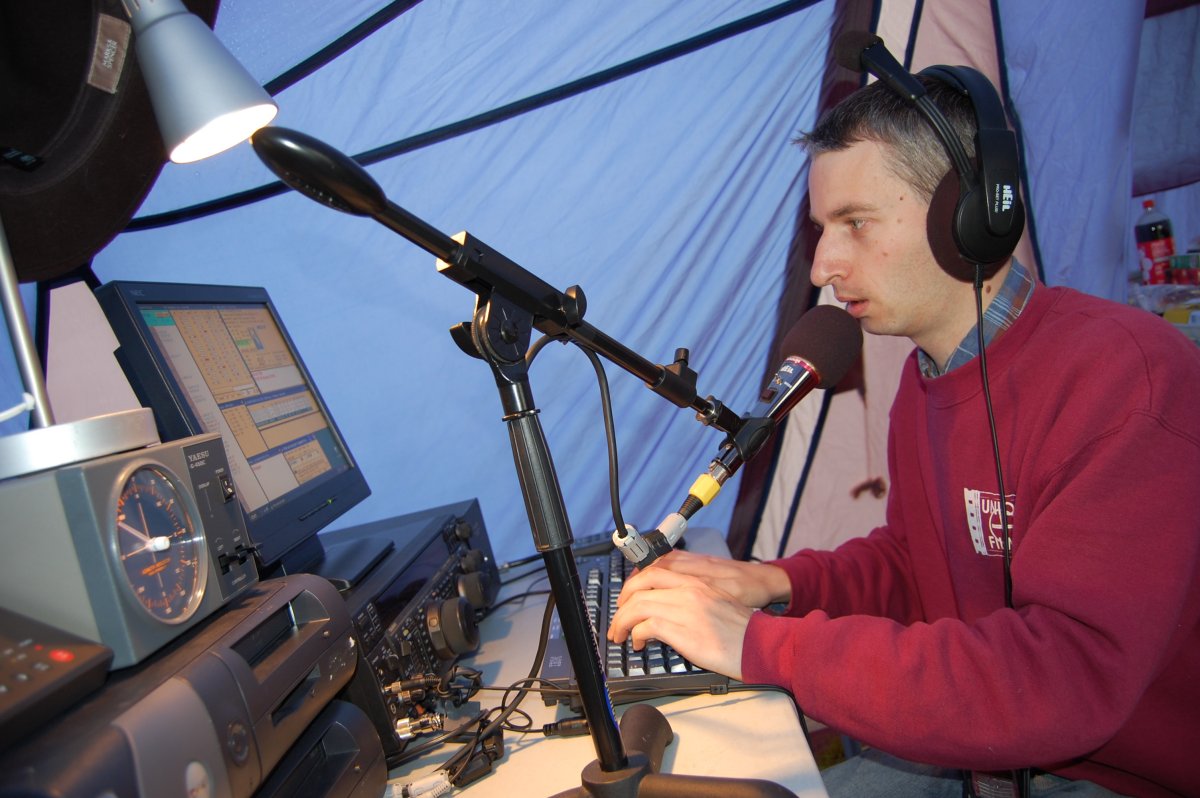 Arriving at the site on Lunchtime Friday, I got the tent up in a complete hurricane. Stripped to my shorts and a T-shirt in the driving wind and rain and all on my own, at one point I just burst out laughing at my predicament. The only thing that kept me sane was the knowledge that some other crazy people in other parts of Europe were also following my example and getting their stations worked up.

Finally at about 15:30hrs, I had a tent up – and all the tent pegs used up, a sure sign that I had screwed the thing hard into the ground. Sporadic rain continued as Terry and James arrived to part assemble the A3S.

Eventually, James and I were left to our own devices to continue building the working station in the tent, networking the machines and arranging the PCs etc. Still, no antennas had been erected.

After our meal in the evening, a quieter weather front descended on us and with still an hour of light left, we put up the 60 foot mast that would house the 40m and 80m fan dipoles. We kept pushing and pushing, even firing up the lighting rig to give us 10kW of light to finish the job (at 1:00am in the morning!). Both dipoles tuned fine, fed off a single 1:1 balun at the top with Westflex straight to the tent. Only the A3S to mount in the morning.

Indeed, with Terry and Lee’s help, we had the A3S up at about 10 meters by mid-morning and we ran a few numbers whilst checking N1MM’s implimentation of Reg1 Field Day. Unfortunately, I missed a trick and for the whole contest, we ran without automatic multiplier recognition. Scoring was right, mults weren’t. What do we all tell everyone to check? The software. What didn’t I do? Grrr! Plonker!

With a couple of spare hours left, I erected the RX loop on a spare mast on a Barenco wheel clamp, running some RG58 back to the tent. Big mistake since the coax “leaked” too much which meant that some bands were difficult to spot due to proximity to the TX antennas – even running Barry’s new Stub Filter switch that he had made for us – but we’d just ran out of decent stuff.

The next 24 hours was a blurr of operating, cups of tea and running repairs. The only real thing that let us down was the 1:1 balun driving the fan dipoles on 40 and 80 which seemed to go open circuit. At 7:30pm on Saturday evening, we dropped the mast, stripped out the balun and directly connected the coax via a spare dipole centre. This meant that Terry carried on running on 20m for longer than he wanted but the propagation came back and he ran a string of West Coast stations prior to dropping down to 80m. Maybe a blessing in disguise?

Lee’s Saturday afternoon stint was taken over by Terry and both left the site by dinner time to leave James and I to run the night shift. Doing half-hour on and half-hour off, we managed very well. It was one of the most interesting night shifts I’ve done. I think staying fresh with only 30 minute stints may have helped. On the other hand, sometimes I wanted more time on the mic, but as a compromise 30 minutes seems about right.

Big contests aren’t right without the obligotary ZLs and VKs early on 40 meters and we were pleased with a small crop of these. Fresh as a daisy, Tim and Terry arrived back on site within half an hour of each other at around 6:30am to allow James and I to hit the sack for three hours sleep, rising just before coffee time in the morning.

I hate the last couple of hours of the /P contests. I know it all has to come down and everything needs packed away again so to get ahead, I dropped the RX loop and packed away the second receiver station, neatly arranging everything in the tent door before lunch.

Blur descended on us. Looking back, everything is in speed-up mode. All I can remember is getting in the bath at about 5:00pm on Sunday night knowing that the car was still jammed with gear.

Enjoy the photos – and write back if you like my drivel!