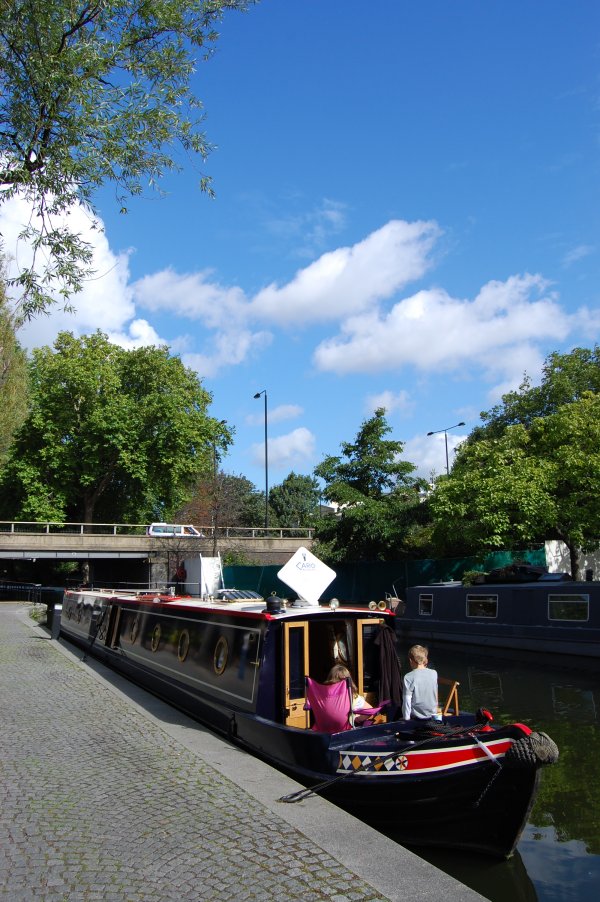 I get an email at about once a week from various members of the NordhavnDreamers group asking me more about our narrowboat which we use on the Inland Waterways of the UK. I find myself repeating myself every couple of weeks, so perhaps a high-quality post here will put your taste buds at ease.

Our boat conforms to a 350 year-old 6 foot 10 inch UK canal barge spec. Actually, they were originally 7 feet wide but some locks have subsided by an inch or so over the last couple of hundred years and a 6 foot 10 inch spec has now been agreed.

We have a 50 hp Beta Marine engine driving an 18 inch three blade prop via a 2:1 reduction gearbox on a 70 foot 23 ton boat. It’s made of mild steel, built on half-inch base lowering to a quarter inch thick on the top deck. The engine supplies 12v to our 4 x 110 ah house batteries and one starter battery via a pair of alternators and we also have something called “Travel Power” which is a bloody great big belt-drive alternator, supplying a 5kW 240v mains device at the flick of a switch (again off the main engine). When I flick it on, I normally have to hit the throttle a whisker to compensate. The throttle is “analogue”. We don’t have a wing or a generator but no switch = no Travel Power (and when it’s on, it’s clearly sucking up power from the engine). This is supplemented by a 3kW Victron inverter. This means, we can have the kettle and toaster on in the mornings when I’m driving along and it also means that the inverter thinks it’s seeing Shore Power and drives the charging flat out. I can achieve a battery “float” after about 12 hours solid charging which lasts us about 18 hours when we’re “on the hook” (mostly fridge, freezer, Sat and TVs). Washing machine use is restricted to when we’re moving and Wendy checks I have the Travel Power “on”. We don’t have an anchor (well, we do but only for river emergencies), we just stop whenever we feel like it and enjoy the view, the wildlife, whatever. Of course, sometimes we can stop right in city centres.

The sound proofing is nothing like a Nordhavn, there’s just an inch thick ply panel between the engine and the master bedroom so it makes a bit of a racket. We have an 8hp electric bow thruster which isn’t proportional but it hangs off a really massive battery (I forget the spec) and it’s very loud with the steel sounding like a bunch of cymbals going off. I can reverse quite easily by using the bow thruster as a steering device, as long as I don’t go too quickly. Apparently the bow thrusters should not be used for more than 2 minutes in any hour. Very occasionally, I think I might be getting near the thermal but so far, never have (does it work..? More questions than answers as usual). I don’t have staged throttle controls, I’m either in neutral or I’m revving the engine for power (or in gear too). I would love a two or three stage idle, as per Ken’s (and David’s) 68, but eventually you have to realise that we’re only doing 4 knots here and the shore is normally within about 12 feet(!), so not much can normally go wrong bar ones ego!

Narrowboats, by their very nature have a number of compromises. For instance, the master bed is only a 4 foot 9 inches wide. This means that we get real cosy watching late-night TV or I sleep in the saloon on an extra large double bed pull-down thingy (she kicks me when I start snoring!). 70 feet long is the absolute maximum you can have on the Midlands and Southern Canal systems. Up “north”, they have wide but dumpy locks. This means that to travel absolutely everywhere in the UK, you need a 58 foot regular-width narrowboat. This is too small for us since we have 2 kids, hence the bunkroom with playstations etc and lots of toys (Ken and John would certainly approve!).

Heating is by a) diesel (furnace) Webasto making hot water which is pumped around a skirting board radiator system. Waste engine heat is dumped over the side on a keel cooling section of the hull. I’m currently talking to the yard to salvage the waste heat and dump it back into the living space in the winter (complimenting the Webasto) since it’s pretty silly to dump heat on the one hand and make heat on the other. B) We also have a couple of electric heaters since we have lots of electricity we can use if required (a novelty on UK canal barges by the way). C) We have a log burner. I’ll often stop the boat in the winter by a large oak tree and salvage some wonderful seasoned dry oak which burns long and hot. Condensation in English narrowboats though is a bit of a problem. The portholes, for instance, do not have a thermal barrier between the outside of the brass and the inside. The consequence is that it will act like a cold beer, water will collect and drip. The only way out this problem (and many boat owners know) is to open all the windows and let the heat out! I vicious circle. However, I’m sure I could have paid even more and gotten around this issue with expensive windows, but we only use the boat in the winter for maybe four or five days so it’s really a non-issue.. Maybe our MkII boat will be better (don’t they say that you always have three boats before you get the spec just “right”..?).

We’ve made a few alterations since the main photo-shoot (the kids bunk room is much better now), but it’s still fitted out in the same European and American oak veneer. Apparently over the next 20 years, this wood will darken. Oak-with-narrowboats are very customary in the UK and it’s difficult to get builders to consider anything else.

The helm is outside, on the stern and we have a long brass tiller extension.