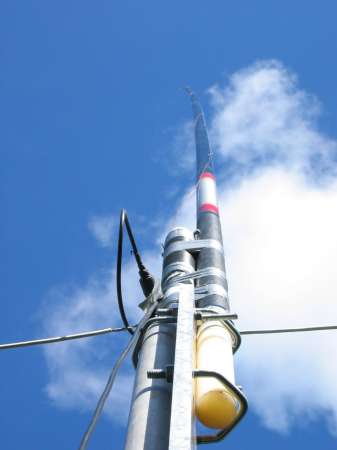 This afternoon, I’ve been playing with an 8 meter fishing pole in the garden, clamped to a 3 meter aluminium pole with 2 x 10 meter elevated radials sloping from the feedpoint at 3 meters to fence height. It’s got a bottom loaded coil to get on 40 meters. I wound the vertical just very slightly helically so that it didn’t flap in the wind however I can guarantee this had no effect on the loading.

After some experimenting, 13 turns gave me a good match between 7.0 and 7.2 with SWR not exceeding 1.4:1 – and I managed to do the final tweaking by shortening the radials by half a meter.

There’s a number of conclusions here. The most surprising is the accident concerning a certain 80m vertical; I started life with 66 turns on the former which gave me an 80 meter vertical antenna. More of that later), the main experiment seems to have worked in giving me a vertical for 40 meters but I also discovered a resonance at 23.6 Mhz which confused me.

However, comparison listening tests between this new vertical and my horizontal delta loop gave me some interesting results. Local signals this afternoon were barely copyable on the vertical but 59+ on the loop. I’ve just been listening to a couple of German stations, probably about 500 – 600 miles away and there is no discernable difference between antennas but a Spanish station that I’m listening to at 1,000 miles away is certainly 1 S point better on the vertical, more often than not. Clearly at distances of 600-700 miles, the vertical starts to outperform the delta loop, certainly on receive.

On transmit, further tests demonstrated to me that more often than not, long distance contacts were slightly more reliable on the vertical than the loop, however since most of my contacts on 40 meters are within 2,000 – 3,000 miles, the loop will be my long term favourite for higher quality contacts and more of them.