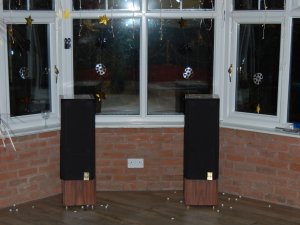 If you have never heard about the Kef 104/2 (104-2) loud speakers, you have missed a life-time treat. I am lucky enough to have the gold plated, bi-wired version. In fact, I had the factory make these for me in the mid-90s, nearly three years after production ended since I missed mine so much. They really are the last pair of 104/2s ever made. Kef upgraded all the components for me and made me brand new Rosewood shells from new veneer. Fabulous looking.

Now. There was originally a weak point with these speakers which was the tweeter. It wasn’t the speakers fault, but the user. I used to blow the tweeters on my first pair of 104/2s too regularly, however replacements were about £15 each so I just used to order a new set and start again. Blown tweeters normally happened when the amp would clip over a long period of time and gradually heat up the tweeter coil. Two things might happen. The cylinder would either warp or the coil would melt. This was not a speaker issue but the user. Basically, turn the volume down. Easier to say than do since mid-party in the heat of the moment, it’s easy to over drive stuff (hence why I now run a 3kW rig, just for party nights – it’s true).

Anyway, let’s correct a couple of worries out there on the internet to do with the replacement tweeter issue. Last year, I thought I had lost a tweeter and called the factory. Contrary to popular opinion, Kef have sourced a fabulous replacement tweeter and they sell them in pairs very ecconomically for 104/2 speaker systems for about £30 a pair. I ordered them up and fitted them. It transpired that I hadn’t lost a tweeter, it was my graphic that had gone AWOL, however the new tweeter is better for a number of reason – not only do they sound great but apparently have better resistance to warping and coil metdown. These days, I just tickle mine with a Crown K1 and they sound marvelous. I ran them as a spare pair at a party last month in the conservatory at half-volume and a couple of people remarked how enormous they sounded.

If you want a speaker to sound four times the size that it really is, buy a pair of these, massive sound stage, big presence and even vertical sound balance. I have no idea how this happens but it does. Stunning. Did I mention massive low frequency response? Amazing for films and rock. Amazing for anything actually! You can pick up non-bi-wired versions from as little as £300 on eBay. The bi-wired versions were essentially upgraded versions with a bi-wire system which I call the Mk2s. These retailed for £2,000. Massive price back then! Starting price for used versions of the Mk2s will be around the £450 mark, perhaps up to £800 for top condition Rosewoods. Always check for matching serial numbers.

I sold these speakers a few months ago and it appears that the foam that held the bass cones to the basket had deteriorated completely and essentially fell off. He sent me the pictures. He discovered a man who rebuilt these at a cost of £85 each (x 4). I paid for them to be refurbished, otherwise the speakers would have been scrapped. They are now (apparently) as good as new. Now then, it appears that almost every 104/2 in the world will have the problem. What a disaster! Same with 105/3 and 107s too. A complete mess.