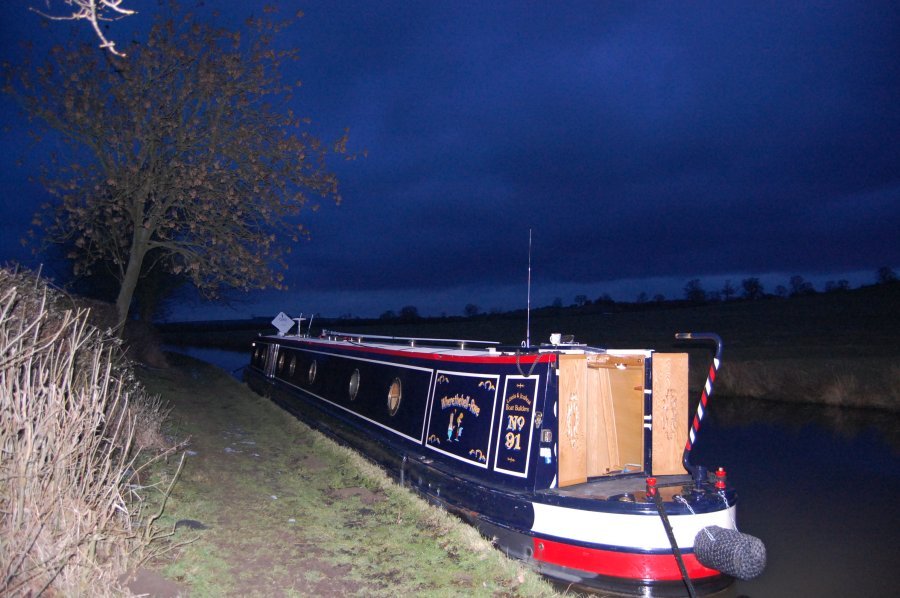 This trip was all about discovering the North Oxford canal via Braunston. Family rules dictate that we were to turn around when we get bored – which we did pretty quickly because there’s nothing to see up the North Oxford! We did a U turn on the morning of Day 2 and spent a pleasant 6 hours cruising back to Braunston, booking a table for 4 at the Old Plough.

During the trip, a couple of interesting moments are worth mentioning.  We stopped just after Hillmorton Locks (I’ll have to check this name but I don’t have the navigation book to hand) to fill with water and just as I was leaving, a hire boat came bombing past. Most hire boats are in a rush so it didn’t bother me. I’ve rarely been held up by one. However this one was different, he kept crashing into the banks! Had it not been dangerous, it would have been very funny! Luckily, narrowboats are made of steel that bounce rather well but it just amazed me that this guy kept getting his lefts and rights wrong. This is quite possible to do of course, but most people’s brains switch pretty rapidly so that their tiller arm becomes second nature. He was sharing the responsibility of getting this right with his teenage son and they both kept getting it wrong. His son would drive towards the bank and his Dad would intervene and make it worse! In the end, I made my excuses and asked in a loud voice if he would allow me to pass. He politely smiled in a way only an embarrased chap could and I skirted around him.

We run a walkie-talkie system on the a boat. I have the TS2000 permanently plumbed in at the helm and I leave a number of rechargeable PMR446 hand-helds lying about the place inside. Yesterday after giving a running commentary to the crew inside the boat I waited on a response and got nothing. I gave another shout and then another. I was asking them for my gloves that I had left on the well-deck (bow) when we filled up with water but I soon realised that someone had switched the radios off so I started using the air-horns. Beep Beep. Nothing. Normally, I get a head out the bow doors looking back at me asking what I want. Ziltch.

Then I had a brain wave. I had recently taught Emily her radio exam (which she passed) so I thought I’d put some morse code into the horns, she’d know that! Bip Bip Bip – Beeep Beeep Beeep – Bip Bip Bip. Yes, I was transmitting SOS on the horns. After the even louder set of blasts, I was worried that some old 2nd world war veteran from the Royal Signals would hear me and call the police so I snapped into reverse and stopped the boat in the middle of the channel and made my way inside. Wendy and Lochlan both had headphones on either watching TV or playing computer games so they didn’t hear but Emily was up and about. I asked her why she didn’t come and see me after hearing SOS on the horns? She said that she just thought I had a lot of boats that I was having problems with. Agh!

Later, we met a boat in the middle of the channel. I kept to the right and finally he kept to his right too. As we crossed paths, he asked me, “am I correct in thinking that we keep to the right – I’m new to this”? Cor blimey, a bit late to discover that!

In the afternoon of day 3, Emily and I were on the stern happily driving along chatting away. We turned a corner and spotted a small 20 foot fibreglass cabin cruiser coming towards us with a little outboard aiming for the centre of a bridge driven by woman who was visibly puffing and straining. She had right of way since she would have been first to the bridge. I dropped to dead slow, my 23 tons to her few hundred pounds. Eventually I was just sitting there at a stop as she came through the single-pass bridge and then aimed at a nasty low tree on my port side – even though there was space for her to come much closer to me, by about six feet. She preferred to aim her cabin cruiser (with brand-new immaculate pram-top roof) into the horthorn tree which nicely scratched her new roof. Swearing and blowing, as she scratched past, she scowled at me in a way only a pretty woman with a damaged ego could, “you could have f*cking moved over a bit!”

Her little husband kept his mouth shut and averted his eyes as I did one of my special anger management situation demonstrations – but failed to cope this time and gave her the war that she wanted. I would have preferred to put a couple of shotgun shells at the waterline to give her something to scream at! Can you imagine? 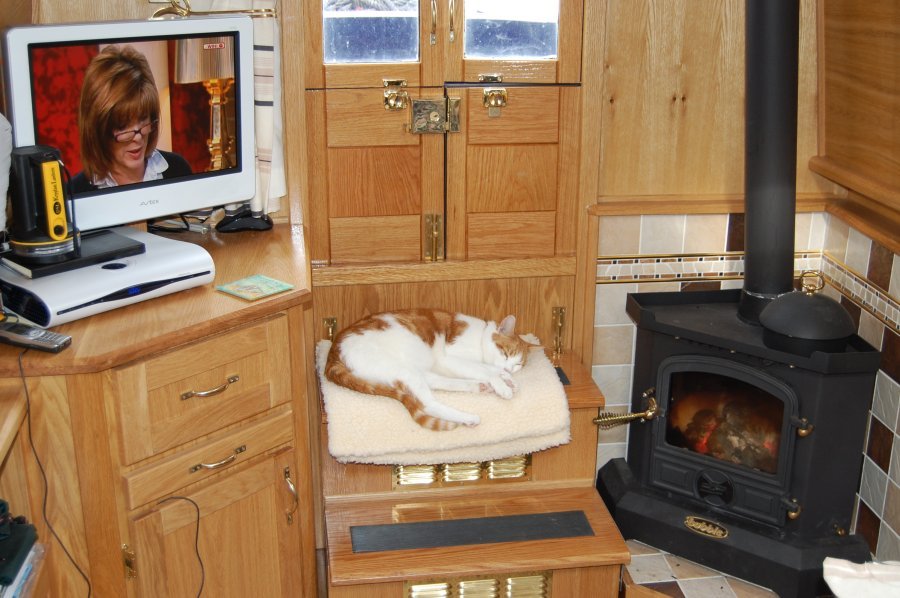 One experiment this trip was taking the three kittens with us. They’re not kittens anymore of course, but more like small tigers. Two of the three are extremely docile and follow Wendy about like a dog (really!) but the third is a throw-back to the wilder side of cats and longs for freedom even though all our (five!) cats are neutered. We have decided next time to only take the two docile ones and leave the third at home with his two older sisters. We are confident that once they understand, we’ll be able to let them wander off for a few minutes at a time which is what they do at home.

On our last night, we went for dinner at the Folly, bottom of the Oxford flight of locks. If you know that area, I turned around at the winding point (turning place) and reversed 300 yards down the canal using the bow thrusters as a kind of rudder. This is way cool since narrowboats don’t have any steering at all in reverse. See http://tinyurl.com/cfjnpe to see where we turned – and as a guide to our size, our 70 foot boat only just clears this turn by a few feet. The chef at the Folly is very funny. She’s got a nick-name of Tick-Tock. I’m not kidding. Her flat-mate in the village is a little Philipino girl and they call her Tic-Tac. Crazy girls.

A couple of issues this trip. First one was condensation on the stainless water tank. I’ve never noticed before but sticking my head inside the well deck, I saw a little bit too much water lying around and dripping off the tank. I confided in the Narrowboats Yahoo Group and David came up with the idea of sticking cork tiles or similar over the surface. The trouble is I can only get to around 30% of the surface area of the tank because it’s supposed to be maintenance free and you just can’t squeeze inside to do these things. So although it’ll probably work, it’s impractical. He’s since thought that I could use spray-foam. This is a permanent solution and if I get it wrong will be a bloody nightmare to remove, if not impossible without cutting the bow off! However, done properly – this would be an amazing solution and would cure the worry of having a frozen tank for good. Allan suggested shoving loads and loads of Rockwool insulation into all the gaps. Builders use this for attic insulation and cavity wall insulation. I believe this might be a superb solution and I’ll look into it, thanks Allan. I’ll report on this another day.

Lastly, I managed to temporarily block the toilet at the same time as everyone else needed to go. Typical. There’s too much detail to go into here so I’ll leave much of this to your your own imagination. The toilet is one of those propeller chopper-upper toilets with the sucker noise. Sounds like an aircraft loo. I don’t know the name of this damned expensive thing but too much debris in one flush seems to cause it all sorts of issues and it stops working. It still makes all the fabulous sucking and spinning noises, and you still get all the water but nothing happens, it just fills up with more water (and debris!). I found a plastic drinking glass (tumbler) and used it like an old fashioned plunger whilst at the same time hitting the flush button. This eventually cleared the issue but I had a heck of a lot of lumpy water that wouldn’t go down the toilet each flush, growing each time. I hit on the idea of taking a glass window out of the port-hole next to me and chucking pints of trashy water out the window. I laughed out loud at one point, considering visions of some poor chap on an old boat getting a lump of sh*t on his head! It was a seriously nasty morning. Anyway, it’s fixed now and seems to flush everytime at the expense of emptying my water tank and filling my toilet tank!