Overview: The first thing that I noticed was that during daylight hours, the vertical was utterly hopeless. Inter-G signals were virtually unreadable, to the point I thought it wasn’t working. Indeed, being daylight, I couldn’t hear a thing, just noise. Switching my NVIS loop in to circuit brought the band to life with usual weird discussions of carrot growth and weather. As nightfall fell, the vertical started performing but nowhere near the performance of the loop. By 22:00 UTC, the Russian and nearby European stations started coming in stronger, but again sounded better on the loop and it didn’t seem to matter what antenna I used to transmit on either. One German noted on comparison tests absolutely no difference on TX. 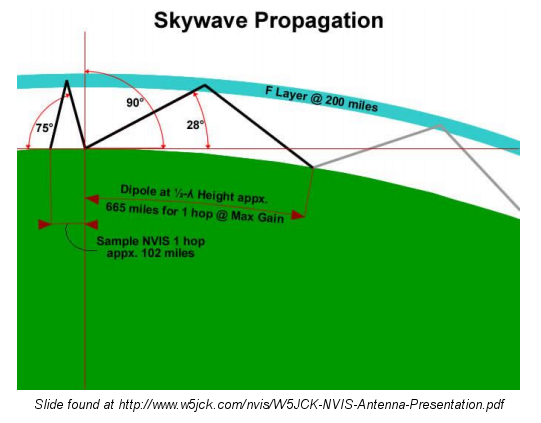 I called for RP3PRP on the loop (he was loud) and he had some problems receiving me so I switched to the vertical and we exchanged reports and my confidence rose. Again with 9A7KM, I started the exchange with the loop because that’s where he sounded so good but flipped to the vertical to complete. Confidence grew higher. Then UP0L in Khasakstan for a 3,500 mile hop again on the vertical. But this isn’t the whole story. Don’t think the vertical performed better on TX than the loop everytime – this isn’t the case. This particular vertical is one heck of a compromise; remember, only about one ninth wavelength and only three meters above the ground.

My loop on the other hand is a proven high performance antenna that’s got a history of DX to the Far East and North and South America. After a couple of hours and 48 QSOs across 20 countries, I realised that for 90% of the QSOs that you make on 80m, an inverted V, a regular dipole or perhaps a delta loop (like mine) at around 30 feet will be fabulous – and you’ll have the advantage of being able to have a QSO in your own country. Occasionally, having the flexibility of switching the vertical in gives you an added interest but it’s hardly worth the effort. A 4-square would be a different story though, and for the uninitiated: a 4-square is 4 x ¼ wave antennas phased in a square, quarter wavelength apart that ‘pushes’ a lobe of RF (db gain) in a specific direction at the push of a button. However it’s hardly an event antennal, more suited to permanent installs.

For me though, I don’t think this test was completely conclusive. I’d like to build a full-size quarter wave with full-sized raised radial set to complete the test with a feedpoint at 5 or 6 meters above ground: in other words, doubling the size of this little twig and maybe I can aim at building it for this year’s NFD. I have a feeling that it was the loaded radials that was restricting my efficiency, not the loading coil in the driven element. My experience of a 40 meter quarter wave gives me some confidence in this arena but I’m also wary of the different characteristics of 80 meters which maybe much more suited to higher dipoles.

There was though one small advantage that I haven’t documented, and that’s the use of a vertical as a dedicated QRM receive antenna. I scored many points by finding distance stations between strong UK stations. I can reduce UK stations by around 40 db by switching in the vertical, whilst at the same time keeping the target station clear in my headphones.

In conclusion, verticals for 20 meters and above may well be good performers and I’ll certainly have a bash at a 20 meter version of this shortly but for 40 meters and below, be clear about what they’ll do for you. I do not recommend them as your primary antenna unless of course you are very restricted on space – and even then, there are shortened alternatives that can be squeezed into small plots.