This year, James and I ran M0XXT at the Scout Hut using a pair of XXT Mega Loops; a full size 160m version and a half-sized one which suited the top end of 80m and 10m. Full-sized Mega Loops don’t work on 10m. I ran out of time to put up a TX vertical for top band, even though I did finally finish making it ready for tuning by Saturday morning during my “off” times at night. Another job for next year. 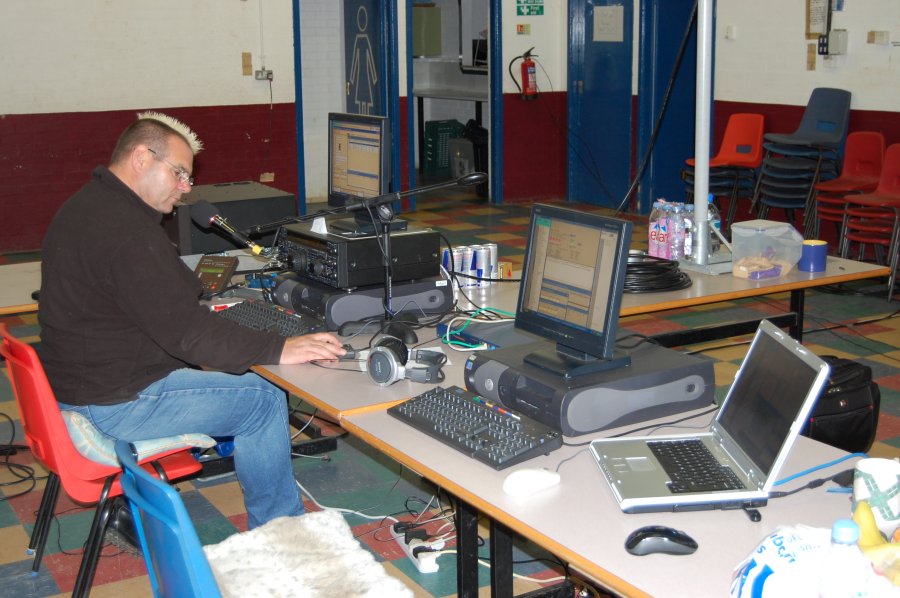 RF was via one of our FT1000MP radios and amplified by an ACOM. A pair of Dell PCs running N1MM did the logging. We networked the PCs for disaster recovery purposes and used the second copy of N1MM on the spare PC a couple of times when RF shut down the run machine. We were Multi-Single.

The antennas really worked miracles, showing almost unbelievable gain which in the main distil to 6 equally spaced compass fingers or lobes – with the main RF being squirted at around 290 degrees (since it’s slightly twisted off it’s X axis due to the perfect location of the local oak trees for USA propagation). I won’t bore you with the compass bearings, it is suffice to say that these RF fingers cover most high density population areas of the globe. The whole topic of these XXT Mega Loops needs a chapter to themselves and as I write this on Monday evening, I can report that this afternoon I ran a huge pile-up to the west coast US at about 16:00z, at one point switching the amplifier off and continuing to run the pile up with 10 watts (!) which reduced our average incoming signal report to 5 and 7 from 20dB over S9. Even on 40m, the gain figures are healthy with 5dB at 10 degree take off angles to the US. 80m is just a big bubble of RF but with the antenna at 90 feet elevation, at least the bubble has some flatness to it. Same with 160m – hence the idea of a massive vertical.

No real technical surprises this year. Everything worked out first time, only after updating SCP did I realise that M0XXT wasn’t shown in the database! What a numbskull. I meant to drop Randy a line to ask for this new call to be added. Having our call queried heavily was quite normal and tedious.

Strategically, we didn’t really have a plan. We believed we would conquer the world and be louder than anyone else(!). We’d just shout louder

Of course it doesn’t work like this and after my 6th CQWW, I can genuinely say that I was yet again blown away by the strong signals on 40m. I even reminded James that this would happen, but it was worse. Isn’t it always like that? This damned loop might be great on TX but you can’t dial out the QRM! I feel some receiving antennas coming on..

I can’t remember when I slept. I do know that between Friday morning and Monday morning, I had 5 and a half hours of the stuff and my diet consisted of everything that the Weight-Watchers lady took me off! I haven’t eaten like that since I was 18

As a team, we had some fabulous times scoring 97 countries on 20m and 92 on 40m. We wanted DXCC on both bands but it wasn’t to be. Had we known that 10m was going to close on Sunday, we’d have spent more time increasing our multiplier-score on that band during Saturday. Experience counts and we lack quite a bit sometimes. 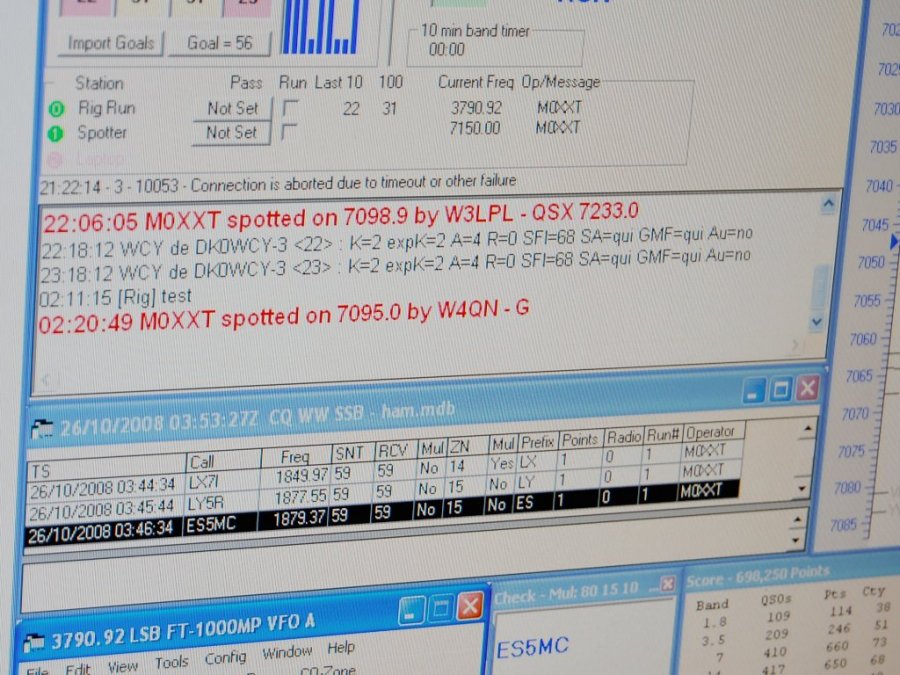 I personally had a couple of exceptional highlights that I’ll remember for a while. The first was on Saturday evening, running a split to the US on 40m and getting a pile up for my money. The rate meter peaked at 230 which I thought was pretty darned good. At one point, I burst out laughing with a mixture of adrenaline rush and terror! I have never had a high-gain antenna to the US and just didn’t think that it was possible to have so many people calling you! Getting spotted by W3LPL made it worse (or better..!!).

The second was during the last half-hour of the contest. We happened to find a tiny gap at the bottom of 80m. I was happy just to score a dozen stations and wrap the deal up. Instead I had another pile-up after being spotted by an EI station. When I remembered to look, the rate meter was at 199 whilst I worked 60 of the bigger ticket Dubyas side-by-side DK and PAs inside 30 minutes. Showing off? You bet! Just fantastic.

Most of the time, we doubled up on the headphones with the spare man checking email and stuff, on standby for some nasty QRM busting ears. N1MM has the CTRL E feature for shooting messages to each other. We used this to fire callsigns at the runner to help them out. Well, I happened to hear an Italian station call us and he used our callsign so we didn’t confuse his call to us for someone else. His pronunciation of “Xray Xray” can only be described as “eggs-ray eggs-ray”. I thought this was quite funny and shot it over to James using the CTRL-E feature. What happened next is one of those moments where everyone gets the giggles. I had to run out the room and laugh out loud in the park (in the middle of the night. No wonder the locals stay away from me!!).

The precise scoring is on a memory stick so I’ll have to report that another time, however we made just under 1.5 million points – and although the station was running for 48 hours, we had plenty of downtime and research moments. James and I can be accidental science professors and it’s unfortunate when a great idea for a piece of software or a new antenna pops up. Everything has to stop while we consider it. Of course in the middle of a decent run this is impossible but band changes can slow the rates down to a dribble. The mind wanders and before you know it, we’re demonstrating a new system of antenna erection or a complete re-write of N1MM. What a hobby!

As I was drifting off to sleep last night (like a breeze block!), I remembered a load of lessons learned topics to write down. Now I can’t remember them. My top tips therefore rely on my favorite topic; having fun. It’s just a game.