This year, I played single op, low power all bands with a couple of full wave NVIS loops for 80m and 40m and a fishing rod stuck on a 6 meter aluminium pole fed via the SG-230 ATU mightily hoisted to feedpoint for all other bands.Worked almost exclusively S&P and achieved 500 QSOs over weekend for just under 140k points which for me was my best score yet (30 x 50 feet garden).It was a trifle difficult to raise it up without crashing through Wendy’s new greenhouse however there’s at least some benefits to being a bit meaty!

How I would have loved to have run high power with my new ACOM but I don’t have the antennas at this QTH to warrant it – and in any case, I’d have blown the SG-230 up!

This weird vertical worked remarkably well, even on 160m however 15m was the best fun and most relaxed and having James in the shack (Foundation Candidate) for 15 hours on Saturday made the contest a very friendly affair – however all the chatting and demonstration meant that I was down on straight Qs but a good day’s radio for both of us all the same.

Voice started to go early on and I’d left it late to install and go through learning curve with my new MK2R+ (I must get around to installing this!) so I nearly had no DVK on hand. Luckily for me, Lee had lent me his DVS-2 for SSB Field Day in September so it rescued my failing voice early on. Very funny when someone needs clarification of the call but only needs last letter and I croak out something resembling XRay – but in a voice only my Mother would recognise (yes, there were stations NOT running super check partial!?!).Bed at midnight after scoring with the standard top-10 NA stations on 40m.Sunday I tried a little harder. Stations heard on all bands all the time but most productive was 15. Found 20m very difficult not having a yagi or higher gain antenna – it was just a mess of noisy frantic stations. Fastest scoring was above 14.300. Best fun was 15m. 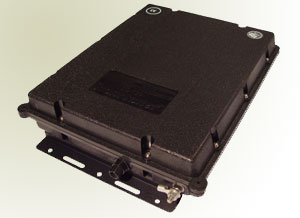 It’s only good for 150 watts or so but I’ve just loaded up top band on a half-sized G5RV at the feedpoint with this little beast. Tunes from 160m through to 10m. I run 12 volts to the loft with a spare run of RG58 (I knew that coax would come in handy!).

You can load up almost anything with this. I’ve always wondered how well the kids trampoline will transmit!

The manual talks about 150 watts being the maximum but elsewhere it discusses 200 watts. I hope that this will be the perfect little friend to my 200 watt FT1000MP Mk5 and I’ll leave my older FT1000MP to partner with the Ameritron.