Having recently taken delivery of a Palstar AT4K manual tuner, I was keen to get her into production to replace my CG5000 in the attic.

Problem: the route to the attic from the shack is complex but I have a number of spare coax runs going that way including a couple of RG58 cables that I installed about 10 years ago as backups. Actually I originally installed three RG58 lines but I’ve been using one of them to send 12V up the line to the ATU. 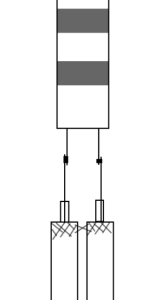 The results have been quite amazing. Comparing my 40m reference dipole to the the CG5000 (SG230 type) ATU feeding the 60m loop has always shown that the loop was about an S point lower than my reference dipole for most stations.