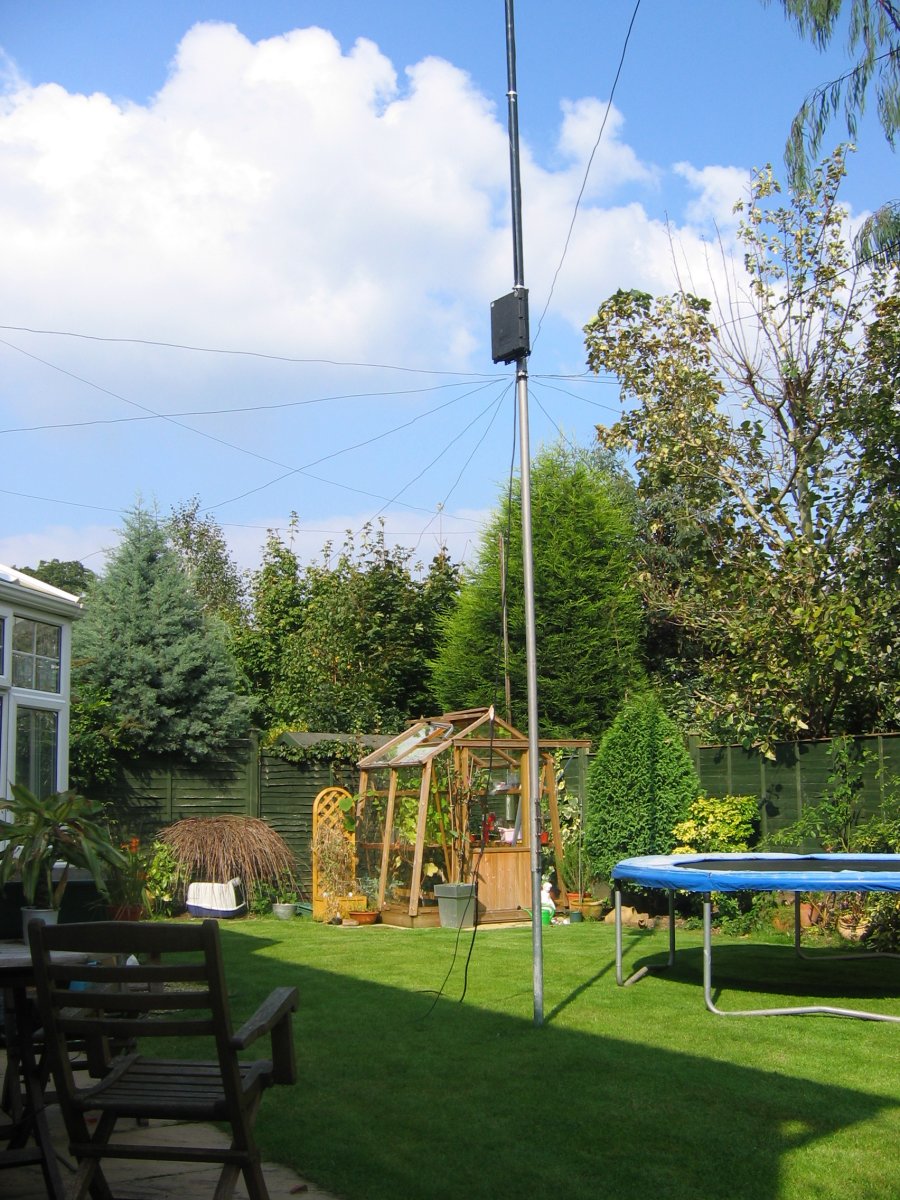 When the kids start to play less outside in the winter, I like to experiment with a new vertical each year. This year it’s a 12m spiderbeam vertical fibreglass pole loosely wound with some hard drawn copper wire. A waste pipe supplies the engineering for the radials with the SG230 doing the matching. This allows me 200w of SSB, in other words, a direct companion for a non-amplified 200w FT1000MP Mk5.

Thankfully, James (M3YOM [yomSOFT author]) popped around last Sunday to help me slide it into an old Barenco 2 inch coupler. This mounts on a steel 51mm outside diamter tube which in turn slides into a plastic mini-drain-pipe that has an internal diameter of 51mm from B&Q DIY store – all a perfect fit. I concreted the plastic pipe into the ground in June before the summer hols. It goes about a meter down.

In terms of its performance, it only really works well on 20m and 40m. The rest of the bands are a wash out but as a 5/8th vertical on 20m, I really am getting a couple of db gain over my other antennas. 15m band is comparable to my little super loop and modelling confirms this. 10m of course is hopeless because it’s longer than a wavelength. Until my 2 element SteppIR turns up, this will have to do.

In testing, I was lucky enough to discover a contest closing but with US stations keen to make a last for contacts on the 40m band. Clearly, it’s a winner there and the aerial allowed easy QSOs with a nuber of contest stations in the US. On 20m too, I scored with a number of US stations at around 21:30 local time on Monday eve when the band was still open. Since then, I’ve had lots of fun with it.

Lessons learned? None really. It’s a heck of a size for just two bands though and it sticks out like a sore thumb from all the streets around here since the top is sitting at just under 60 feet. Clearly last year’s version was also a 40m and 20m model but I didn’t realise that then. I did though speak to 23 countries on 160m. I’ll be interested if it still has any top band performance this year – or was that a fluke..?

A great weekend with rain and wind but with some sun too. Lee G0MTN popped along for a few hours too. A top-three finish again.