I’ve had a few emails requesting a deeper understanding of the 80m vertical we put up in January. Andy (M0CTR) kindly emailed me today and I have published my email so that others might benefit.

Andy, The 80m vertical was an interesting project. Firstly, let me explain that the 80m vertical was a carbon copy of a 40m vertical I made a few months before. I multiplied most of the dimensions by a factor of 2 – bar the vertical radiator. I needed to make a coil for the middle. Have you seen this: https://www.m0mcx.co.uk/?p=68 – and read the PDF article. It was this that gave us the inspiration for the 80m version.

To business: The whole thing has an elevated radial system – this is very important because a grounded system would need loads more radials and the match would not be near the 50 ohms we achieved. Building a quarter wave though is relatively easy if you just build everything in quarter wavelength dimensions – hence the 20m long radials. Theory suggests that you only need 2 x elevated radials for an elevated vertical, however practice is demonstrating that you do get a slightly better radiation pattern for 4 x radials since nothing is actually accurately cut (even if you think it is). Don’t despair though – we have built this with 2 radials and it’s very compact like this. A wire cross 40m x 40m is a huge beast.

The height: We used a 6m scaffold pole to raise my 12m spiderbeam pole up. The photos don’t do it justice.. It’s quite high! You need the height though to make it all work. Don’t get me wrong.. It will work at say 12 feet above ground, but the higher the better. Theory tells you to build the radials at a 30 degree angle from the horizontal, but you would need to go higher again. However, it all becomes big – even the weight of the wire starts to make stuff sag – and the coax gets tangled, you trip over guy wires, etc, etc. 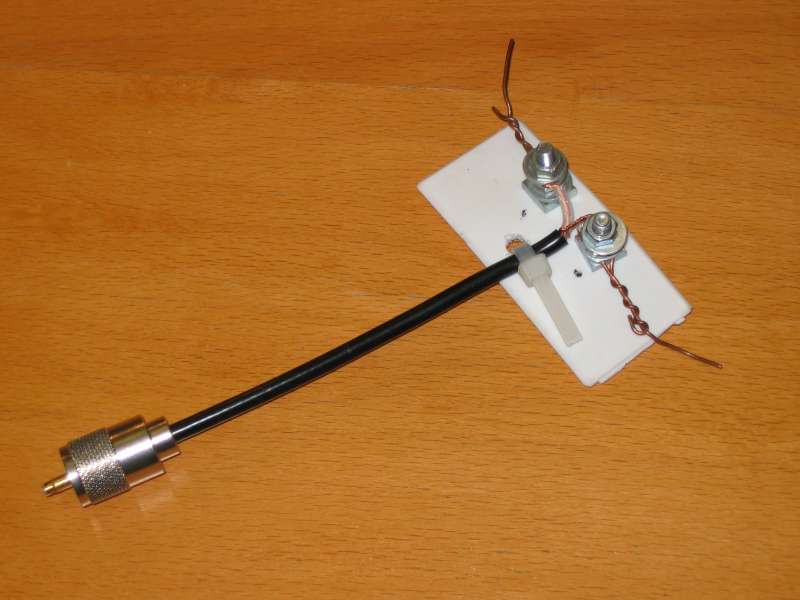 Assuming you have built everything so far to this large scale, you only need to worry about the vertical radiator and then this is just a matter of making a coil. I forget the actual dimensions, I think it ended up at 33 turns on a 2 inch former, using 2.5mm ring mains insulated copper wire (we used the Red portion!) and we put the coil right in the middle of the vertical. It’s an easy matter of raising it, measuring SWR then lowering it again to make adjustments to the coil to finally get a match. I seem to remember that one turn was worth about 40kHz (this moved the SWR from 3.700 to 3.740) but I don’t remember exactly.

I guess you must have seen this: https://www.m0mcx.co.uk/?p=100 – well you will also note in the photos that we started life with about a meter of spare wire sticking out the top of the SpiderBeam pole. We didn’t need this, we had to chop it off and reduce the turns to get the frequency up to about 3.700. I recall that in the end, we agreed to remove another turn but by then, we just wanted to operate!

The feed point was a dipole centre from Lynch / Westlake or somewhere, however a home-brew one would have done just as well. Ensure that everything is watertight and that the centre conductor does end up feeding the vertical – not the radials! You may laugh, but I really did make some contacts on 20m on a narrowboat once by feeding the hull instead of the vertical (yes, the vertical became the ground for the boat antenna!) see here: https://www.m0mcx.co.uk/gallery/picture.php?/501/category/44.

So that’s it really. Use any wire for this. It won’t matter at all. The coil needs to be insulated wire because otherwise it will short out and become a straight vertical. Oh! And you might like to put half a dozen ferrite cores on the coax near the feedpoint as a kind of RF choke so that your RF doesn’t come back down the braid and cause you RF feedback. We never did though.

Results? In the end, I personally concluded that the only band I don’t like verticals for is the 80m band(!). I have compared this antenna with high dipoles (60 feet) with both USA, ZL and VK switching between this vertical and the dipole – none of them gave me a better sig report on either antenna. “No difference” was the reply. However, a 60 foot high dipole is a pretty big monster in its own right unless you have some serious kit. We are endlessly operating of the fringe of physics – yes we have snapped a 12m Moonraker mast last year pushing the limits!

Tip: Next time we’re going to try an inverted L without the coil. Modelling suggests better inter-G and almost as good far field plots at lower angles for DX. Watch this space (as they say!) 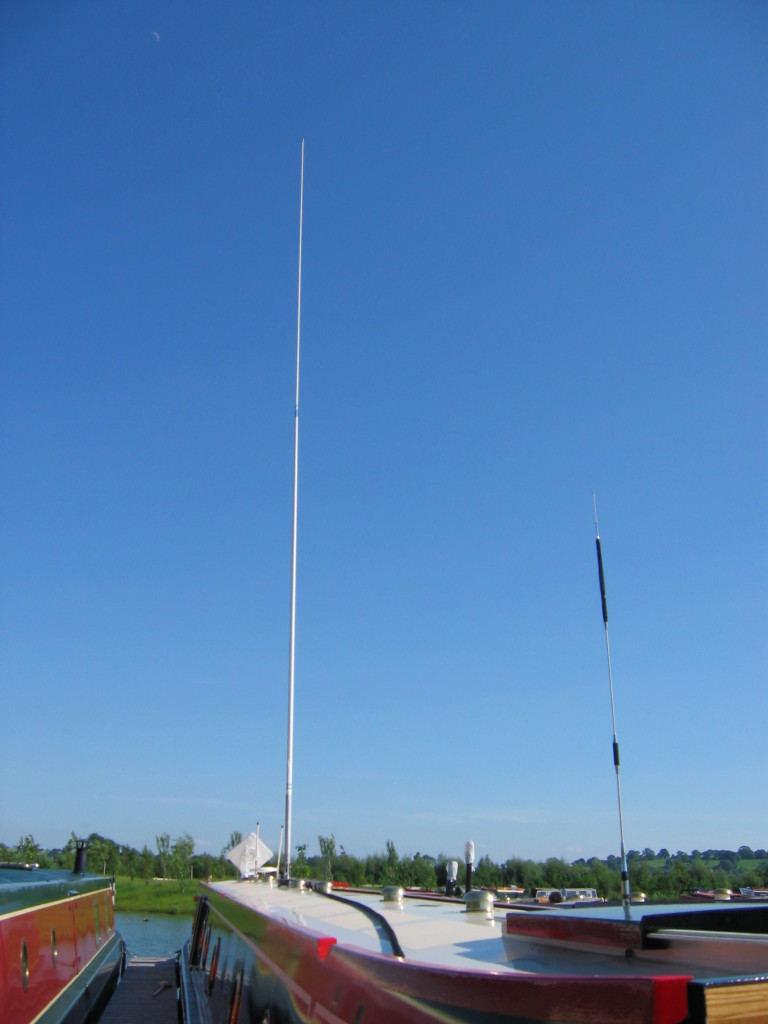 Competing directly with the jumped up bunnys who post anonymously on uk.amateur.radio, I honestly and openly welcome you (and hereby invite you!) to join the Yahoo Group uk_amateur_radio, regardless of any brushes with the law you may have had or anyone else in the UK hobby (or with me for that matter!).

I really like the idea of uk.amateur.radio but the anonymous postings concern me. At least an open warranted forum will encourage genuine debate.

We’re looking for at least three independant moderators who can approve / deny access to the list. Just drop me a line if you would do this job.

Wherethehell-Rwe, our new 70 foot, 22 ton narrowboat was launched last week whilst we were in Disneyland. For once I’m actually speachless!

The fit out starts in earnest since it’s the factory’s show boat at the Inland Waterways 2008 show, end of May. This means that Mike and the boys need to get some overtime in and finish inside seven weeks. Record breaking stuff.

I’m fitting a TS2000 up front with an RC-2000 remote head at the steering position with an 800w PEP feedpoint ATU connected to a Shakespeare Marine 5300 SSB antenna on a Barenco hinge. This means when we are stationary, I can raise it up easily and play HF. I’ve also specified a quad-band mini vertical for 10, 6, 2 and 70cms near the stern that I can lift-n-tilt when needed (bridges and trees) as we’re driving along. I’ll truly be a mobile station.

The only thing I haven’t managed to shoe-horn in is SGC’s 500w amplifier. We just can’t seem to find the room to fit it and supply the air-flow along with up to 100 amps of 12V DC. We’re putting the cables in though in case I can find a place up fron in the future.. a 60 foot run at 100 amps..? Woah.

Anyway, we’re dead excited and look forward to working many of our friends whilst “mobile”. Watch this space!