Llyn Brianne is a dam – or is it a lake? I do know that it’s named after a stream called Nant y Bryniau which means a stream in the hills.  It would seem that at some time a map maker had mispelt the word Bryniau and it is said that had the name not been mispelt, Llyn Bryniau may have had a more apt name; “lake of the hills”. Whatever it’s called now, I can tell you that in the early 1960s when it was built, a large amount of landscape went to a watery grave.

Originally, this lake fascinated me because of the solitude and amazing landscape all around it. I knew nothing about the local inhabitants and nearby village – part of which was underwater. One day whilst looking through photographs of Llyn Brianne on Google, I came across the now famous photograph of Fanog Farm which was completely exposed during a very dry summer of 1976. I understand that before the reservoir was built, this farm was actually abandoned. I originally imagined the shock and horror of those people who once lived in it but thankfully, the people who lived there had moved out years before. The For Sale sign was of course put there as a joke – a very short lease!

The nearby village is called Rhandirmwyn – and contrary to foklore it wasn’t submerged when the dam was built. Local folk though were of course extremely scared of the dam. Imagine what would happen if it had broken in the night? Nightmare stuff. Indeed, a couple of years ago, Ian and I camped on a river beach, only a couple of miles downstream from the dam wall (and extremely pleasant it was too). I didn’t realise it at the time but I would have actually been quite scared had I realised where we actually were!

When I visit Llyn Brianne today, I am stunned by the quietness. I often talk about how so very quiet it is and I ask friends to come and visit the place with me as if it has magical properties – even though it takes 4 hours to get to from where I live!

I shall try and visit again next year (2008) and perhaps take an HF radio along so that we can light it up on 80m.

Post Script: I have recently discovered that three Francis-pattern turbines were installed as a “retro-fit” operation to turn this into a hydro-electric plant operating all the year round. Peak efficiency is between November and March producing 4.3Mw – enough electricity to power a small town. Fantastic!

James and I tested out a doublet today in preparation of our trip to Hampton in Arden Cubs, Friday 30th November.

We used the generator to power the FT1000MP MkV (200w) effortlessly pumping the hydraulic mast up to 10m with the SG230 bungee-strapped to the top, running one of our 80m dipoles across the top to form a doublet.

Total set up time was about 25 minutes. This included un-hiching the generator and levelling the mast.

We called CQ on 3.750.00 from the boot (see picture) and G3ZSE (John) came straight back with a 59 report. Then the rain started! We had parked the car so that the wind was off us but even so, it didn’t take very long for everything to get wet!

We only spent 30 minutes on the radio and had a pleasant 6-station pile-up but after clearing with G4FWG , we tore down the gear as fast as possible. I could hardly feel my fingers and my gut feeling was that shortly it would be hammering down. Within 25 minutes though, we were back at home for a cup of tea, all packed up.

Bottom line: For 80m NVIS style of operation, it works a treat.

We’ll be on air again at the Scout Hut on Sunday 22nd February. This is a similar event to JOTA but with some of the more “boy” activities changed to slightly more “girly” ones. For instance, the girls will have the opportunity to make morse-code bracelets with their name in different coloured beads to signify the dots and dashes. Great, eh?

I’m just confused about the callsign we should chose since we’ll have two completely different Guiding Groups converging into one, perhaps GB1GG (the GG standing for Gilr Guiding?). I’ll call Ofcom.

Have you heard about the Travelpod?

Trialing in 2008, and only at a few selcted destinations (bah humbug), you may hire a Travelpod from only £26 per night, delivered.

Think how amazing field day events could be with this? Just dump the bed and convert to a shack! IN fact, for £26, take half a dozen! 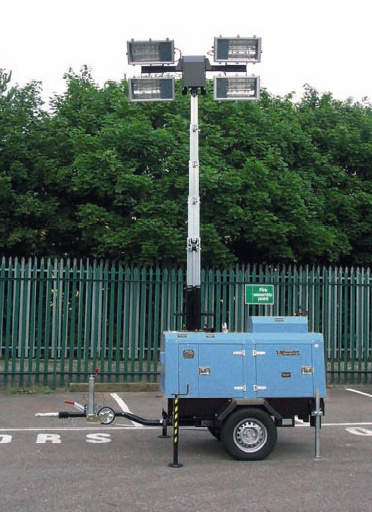 A 10k generator and a lighting tower; the ultimate toy for a radio amateur. You get a generator, a hydraulic 10m tower and big, big lights – all in one package. It’s heavy but with a braked trailer and the right vehicle, it’s breeze.

Picture shows tower at about half-height and Barry has kindly offered to make a rotator housing for the very top of the unit which we’ll sort out this winter.

It’s easy to climb on top to make adjustments (mandatory at a field day with rotator housing fitting etc) and only 20 seconds to “wind” the tower up. Fair dinkum, it’s not a 100 foot tower but horses for courses, a great little easy-to-use package.

We should be operational for next Spring (2008) where we can enjoy some lazy days out in the Cotswold Hills on VHF – as well as HF Field Day (which was the initial reason for getting it!).

Tim and I hosted a first for Dorridge Scout Group club station this year when M0XXT became GB1DSG for JOTA 2007 on Sunday 21st October.

With dipoles for 40m and 80m erected at 18 meters(!), and the ACOM 2000 running, we were loud across EU on 80m delivering greetings messages for 30 Beavers, Cubs and Scouts. The event started with the ARRL film, “Hello” moving to Morse Code sending and receiving, QSL card design, greeting message construction – and finally the actual greeting message delivery on the microphone.

Thanks to all stations that ran with our little pile up – a particular thank you goes to GB50YOU operated by M0MLG (Michaela) who was patient, witty and laughed at my jokes! Riding shotgun with her was both her Mother and Father but for the life of me, I can’t remember your callsigns, sorry. A great QSO though, thanks.

My personal thanks go to Tim, M3SDE, who once again was star of the show, holding the fort when we needed solid radio operating during the day and later in the evening, running one of the most pleasant pile ups you would ever likely hear. Keep up the great operating Tim, the world could do with more of you.

This year, I played single op, low power all bands with a couple of full wave NVIS loops for 80m and 40m and a fishing rod stuck on a 6 meter aluminium pole fed via the SG-230 ATU mightily hoisted to feedpoint for all other bands.Worked almost exclusively S&P and achieved 500 QSOs over weekend for just under 140k points which for me was my best score yet (30 x 50 feet garden).It was a trifle difficult to raise it up without crashing through Wendy’s new greenhouse however there’s at least some benefits to being a bit meaty!

How I would have loved to have run high power with my new ACOM but I don’t have the antennas at this QTH to warrant it – and in any case, I’d have blown the SG-230 up!

This weird vertical worked remarkably well, even on 160m however 15m was the best fun and most relaxed and having James in the shack (Foundation Candidate) for 15 hours on Saturday made the contest a very friendly affair – however all the chatting and demonstration meant that I was down on straight Qs but a good day’s radio for both of us all the same.

Voice started to go early on and I’d left it late to install and go through learning curve with my new MK2R+ (I must get around to installing this!) so I nearly had no DVK on hand. Luckily for me, Lee had lent me his DVS-2 for SSB Field Day in September so it rescued my failing voice early on. Very funny when someone needs clarification of the call but only needs last letter and I croak out something resembling XRay – but in a voice only my Mother would recognise (yes, there were stations NOT running super check partial!?!).Bed at midnight after scoring with the standard top-10 NA stations on 40m.Sunday I tried a little harder. Stations heard on all bands all the time but most productive was 15. Found 20m very difficult not having a yagi or higher gain antenna – it was just a mess of noisy frantic stations. Fastest scoring was above 14.300. Best fun was 15m.